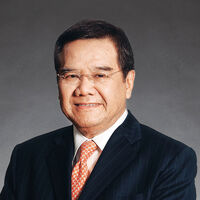 Abdullah bin Tarmugi (born 25 August 1944) is a former Singaporean politician. He was the Speaker of Parliament[1] and a Member of Parliament (MP) for East Coast Group Representation Constituency (East Coast GRC) from 1996 to 2011[2].

Born to a Javanese father and a Chinese mother, Abdullah's father was a low-salaried surveyor's assistant and his grandfather ran a provision shop.

Before entering politics, Abdullah Tarmugi worked as an urban sociologist, senior statistician/planning analyst, journalist, and a research manager. He was first elected as a Member of Parliament in 1984, starting out at Siglap constituency and later Bedok Group Representation Constituency (Bedok GRC) from 1991 to 1996. After Bedok GRC and Eunos GRC was merged to form East Coast GRC in 1997, Abdullah still remained in the Siglap ward but under East Coast GRC. Abdullah was the Minister for Community Development, Youth and Sports and the Minister-in-charge of Muslim Affairs from 1994 to 2000 and 2000 to 2002 respectively. Abdullah was also the Deputy Speaker of Parliament from 1989 to 1993 before becoming the Speaker of Parliament on 25 March 2002. He had a fulfilling public career rising from Minister of State, Senior Minister of State to Cabinet Minister. He was also the Minister-in-charge of Muslim Affairs from 1993 to 2002 before becoming the Speaker in 2002.

The minister moving the bill argued that since 1973, the government's intention was for people who had changed gender/sex to live a life according to their new gender, including the right to marry. Through an oversight, the law relating to marriage had not been re-aligned with the official policy to recognise sex reassignment surgery. Now that the courts had illuminated this inconsistency after a landmark case in which a wife sought and won the annulment of her marriage to a transman (Lim Ying v Hiok Kian Ming Eric), it was necessary to amend the Women's Charter to ensure that the original intention was not undermined.

Abdullah announced his retirement from politics on March 24, 2011, prior to the 2011 general elections[4]. In January 2012, Abdullah was appointed to the Presidential Council for Minority Rights by Singapore President Tony Tan[5].