Alan Seah is an advertising executive, impresario, entrepreneur and LGBT activist. In 2004, he opened the iconic gay disco Happy at 21 Tanjong Pagar Road with business partner Glen Goei. Seah has been a member of the Pink Dot SG steering committee since its inception in 2009.

In the run up to the Parliamentary petition to repeal Section 377A of the Penal Code, Seah co-organised an open letter to the Prime Minister online, urging the abolition of the anti-gay statute[1].

The 400-page letter which was supported by 8120 signatories was hand-delivered to the Prime Minister's office at The Istana on Monday, 22 October 2007 at 2.30pm by Seah, theatre doyen Ivan Heng and actress/singer Pam Oei.

The National Day (9 August 2011) edition of TODAY newspaper featured a full-page article on Pink Dot, implying that the LGBT community was regarded as an integral part of Singaporean society on her 46th birthday. It interviewed Alan Seah and published a huge photo of Seah and his mother, seated on a wheelchair[2]. 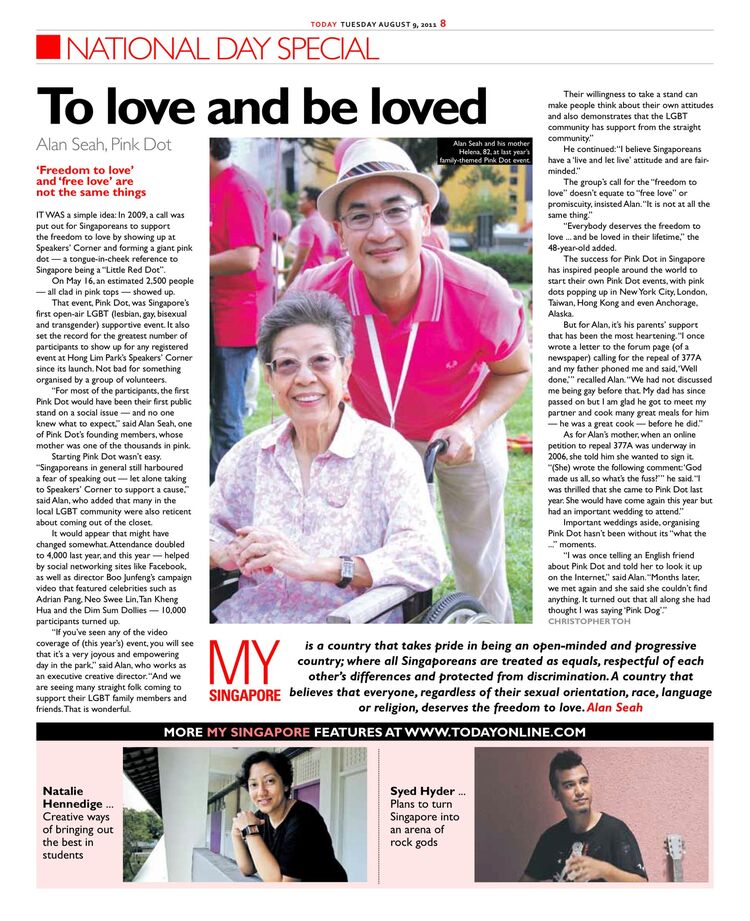 On 1 April 2021, Coffee Talk[3] uploaded a video to YouTube in which host Daniel Yun interviewed Seah on what it meant not to repeal Section 377A and more[4]. The interviewer deliberately took an opposing rhetoric to up the heat of the conversation, in line with the platform's aim of channelling diversity and challenging mindsets.