Dr Ang Yong Guan is a practising psychiatrist and former colonel in the Singapore Armed Forces. He is also a politician and a member of the SingFirst (Singaporeans First) political party. He ran as a parliamentary candidate for the party during the 2015 General Elections.

Study on psychological problems of NSmen, 2000[]

In 2000, Ang co-authored an academic paper entitled, "Adjusting to Military Life - Servicemen with Problems Coping and their Outcomes", published in the Singapore Medical Journal (downloadable in PDF format:[1]). The research retrospectively studied 77 servicemen in the work year July 1995 to June 1996 who were referred to the Psychological Medicine Branch (PMB) of the Singapore Armed Forces within six months of enlistment. The main classes of diagnoses found in the study were stress-related disorders, anxiety, mood and psychotic disorders. The main stressor was problems adapting to the military environment. The demographic profile of the servicemen was an age ranging from 17 to 23 years old; 81.8% of patients were heterosexual and 18.2% were homosexual.

Referendum on Section 377A[]

Ang was the first politician in Singapore to propose a referendum on repealing Section 377A of the Penal Code, the archaic, colonial-era law which criminalises sex between men. On Monday, 7 September 2015, in a rally speech at Boon Lay during the hustings for the 2015 General Elections, Ang said:

"We will push for referendum on these issues. Another example is Section 377A. We respect the diverse views on these issues. These are moralistic issues. Issues where people hold strong views. And the only way to sort it out is to have a referendum. We need to have open debate to discuss these issues. And we need to embrace diversity. We can no longer make assumptions for people. Referendum is the way forward!"[2] 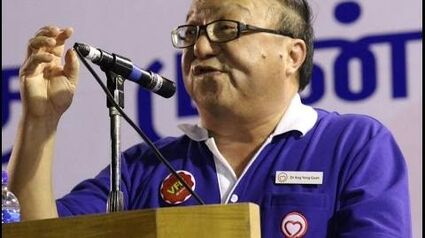