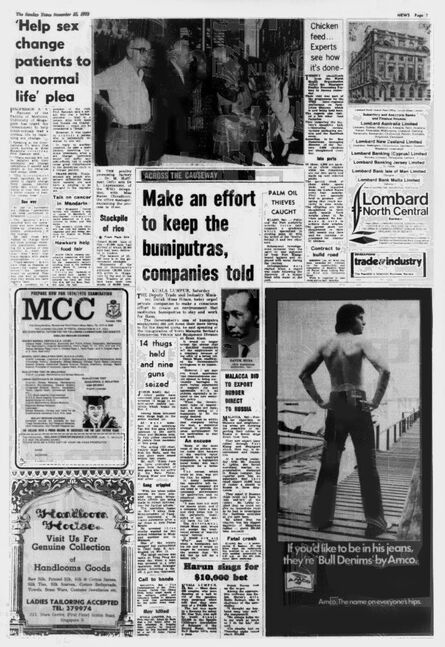 Professor S. S. Ratnam of the Faculty of Medicine, University of Singapore has urged the Government to help trans-sexuals lead a normal life by legalising sex change.

"Trans-sexuals will not be satisfied with their successful sex change operations if society and people do not recognise and accept them.

"The Government must, therefore, be prepared to legally change their names, identity cards and travel documents so that they have a better chance of leading normal lives."

So far 15 successful sex change operations had been performed in Singapore.

The patients were satisfied with the operations and were receiving follow-up treatment to ensure permanency of the change. He said those who wished to change their sex must undergo extensive psychiatric screening for a period of nine months to make sure that they were true trans-sexuals with stable personalities.

Trans-sexuals must here lived as females or males for many years before the operation would be allowed. This was one way to ensure that they would not have regrets later.

To a question by a member of the club, Prof. Ratnam said a person who was a hermaphrodite - that is, a person with both male and female sex characteristics - could not be considered a "freak".

However, it was easier to convert a person who is technically bisexual to one sex.

In reply to another question, he said a male patient receiving hormone treatment after a sex change operation would not suffer any side-effects, but it could cause great disturbance to the menstrual cycle in a female patient.

TRANS-NOTE: Transsexuals are people who behave differently from their natural sex and have a longing to be changed to the opposite sex.