This article was published on 28 March 1941 in The Singapore Free Press and Mercantile Advertiser (1884-1942) on page 7[1]. It included a report on the first case tried under Section 377A of the Singapore Penal Code. 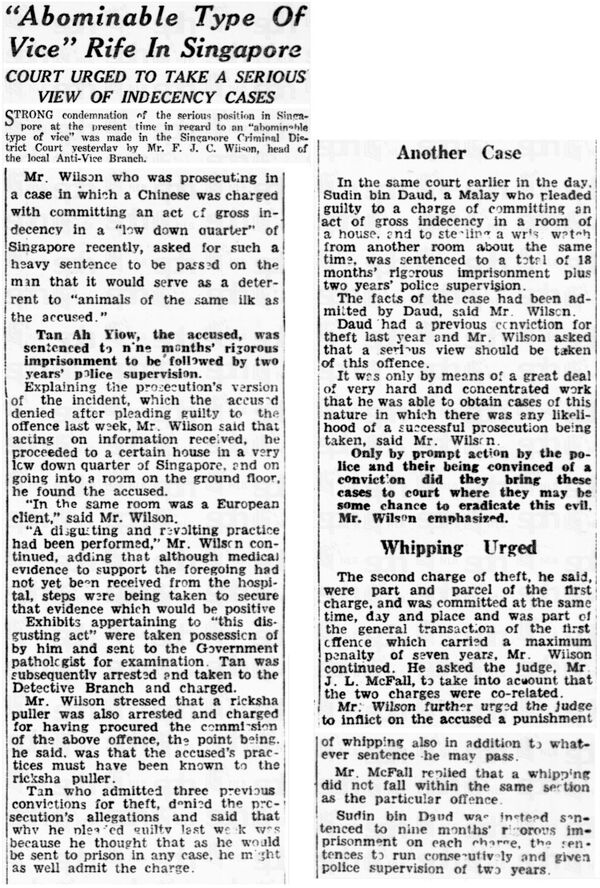 COURT URGED TO TAKE A SERIOUS VIEW OF INDECENCY CASES

STRONG condemnation of the serious position in Singapore at the present time in regard to an “abominable type of vice was made in the Singapore Criminal District Court yesterday by Mr. F. J. C. Wilson, head the local Anti-Vice Branch.

Mr. Wilson who was prosecuting in a case in which a Chinese was charged with committing an act cf gross indecency in a “low down quarter” of Singapore recently, asked for such a heavy sentence to be passed on the man that it would serve as a deterrent to “animals of the same ilk as the accused.”

Tan Ah Yiow, the accused, was sentenced to nine months’ rigorous imprisonment to be followed by two years’ police supervision.

Explaining the prosecution’s version of the incident, which the accused denied after pleading guilty to the offence last week, Mr. Wilson said that acting on information received, he proceeded to a certain house in a very low down quarter of Singapore, and on going into a room on the ground floor he found the accused. “In the same room was a European client,” said Mr. Wilson.

“A disgusting and revolting practice had been performed,” Mr. Wilson continued, adding that although medical evidence to support the foregoing had not yet been received from the hospital, steps were being taken to secure that evidence which would be positive.

Exhibits appertaining to “this disgusting act” were taken possession of by him and sent to the Government pathologist for examination Tan was subsequently arrest and taken to the Detective Branch and charged. Mr. Wilson stressed that a ricksha puller was also arrested and charged for having procured the commision of the above offence, the point being, he said, was that the accused’s practices must have been known to the ricksha puller.

Tan who admitted three previous convictions for theft, denied the prosecution's allegations and said that why he pleaded guilty last week was because he thought that as he would be sent to prison in any case, he might as well admit the charge.

In the same court earlier in the day Sudin bin Daud, a Malay who pleaded guilty to a charge of committing sn act of gross indecency in a room of a house, and to stealing a wrist watch from another room about the same time, was sentenced to a total of 18 months’ rigorous imprisonment plus two years’ police supervision. The facts of the case had been admitted by Daud, said Mr. Wilson.

Daud had a previous conviction for theft last year and Mr. Wilson asked that a serious view should be taken of this offence.

It was only by means of a great deal of very hard and concentrated work that he was able to obtain cases of this nature in which there was any likelihood of a successful prosecution being taken, said Mr. Wilson. Only by prompt action by the police and their being convinced of a conviction did they bring these cases to court where there may be some chance to eradicate this evil, Mr. Wilson emphasised.

The second charge of theft, he said, were part and parcel of the first charge, and was committed at the same time, day and place and was part of the general transaction of the first cffence which carried a maximum penalty of seven years, Mr. Wiison continued. He asked the Judge, Mr J. L. McFall, to take into account that the two charges were co-related.

Mr. Wilson further urged the Judge to inflict on the accused a punishment of whipping also in addition to whatever sentence he may pass.

Mr. McFall denied that a whipping did not fall within the same section as the particular offence Sudin bin Daud was instead sentenced to nine months’ rigorous imprisonment on each charge, the sentences to run consecutively and given police supervision of two years.