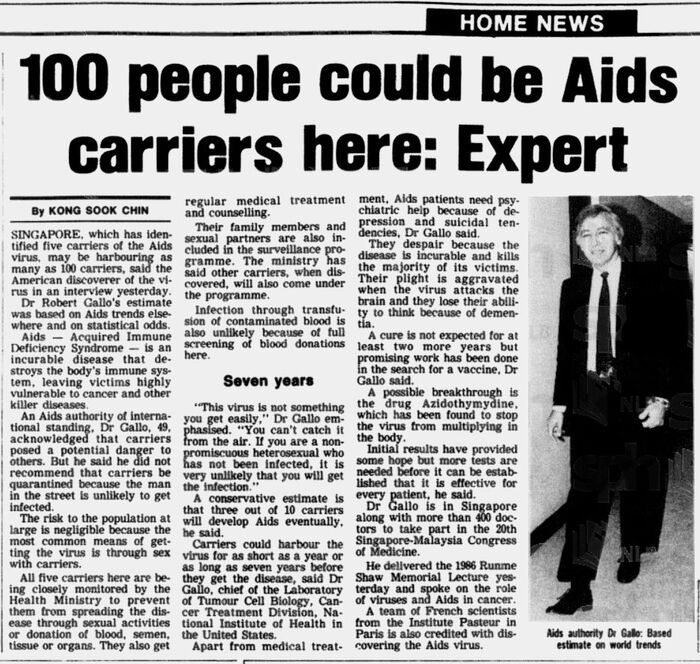 SINGAPORE, which has identified five carriers of the Aids virus, may be harbouring as many as 100 carriers, said the American discoverer of the virus in an interview yesterday.

Dr Robert Gallo's estimate was based on Aids trends elsewhere and on statistical odds.

An Aids authority of international standing, Dr Gallo, 49, acknowledged that carriers posed a potential danger to others. But he said he did not recommend that carriers be quarantined because the man in the street is unlikely to get infected.

The risk to the population at large is negligible because the most common means of getting the virus is through sex with carriers.

All five carriers here are being closely monitored by the Health Ministry to prevent them from spreading the disease through sexual activities or donation of blood, semen, tissue or organs. They also get regular medical treatment and counselling.

Their family members and sexual partners are also included in the surveillance programme. The ministry has said other carriers, when discovered, will also come under the programme.

Infection through transfusion of contaminated blood is also unlikely because of full screening of blood donations here.

"This virus is not something you get easily," Dr Gallo emphasised. "You can't catch it from the air. If you are a non-promiscuous heterosexual who has not been infected, it is very unlikely that you will get the infection".

A conservative estimate is that three out of 10 carriers will develop Aids eventually, he said.

Carriers could harbour the virus for as short as a year or as long as seven years before they get the disease, said Dr Gallo, chief of the Laboratory of Tumour Cell Biology, Cancer Treatment Division, National Institute of Health in the United States.

They despair because the disease is incurable and kills the majority of its victims. Their plight is aggravated when the virus attacks the brain and they lose their ability to think because of dementia.

A cure is not expected for at least two more years but promising work has been done in the search for a vaccine, Dr Gallo said.

A possible breakthrough is the drug Azidothymydine, which has been found to stop the virus from multiplying in the body.

Initial results have provided some hope but more tests are needed before it can be established that it is effective for every patient, he said.

Dr Gallo is in Singapore along with more than 400 doctors to take part in the 20th Singapore-Malaysia Congress of Medicine.

He delivered the 1906 Runme Shaw Memorial Lecture yesterday and spoke on the role of viruses and Aids in cancer.

A team of French scientists from the Institut Pasteur In Paris is also credited with discovering the Aids virus.