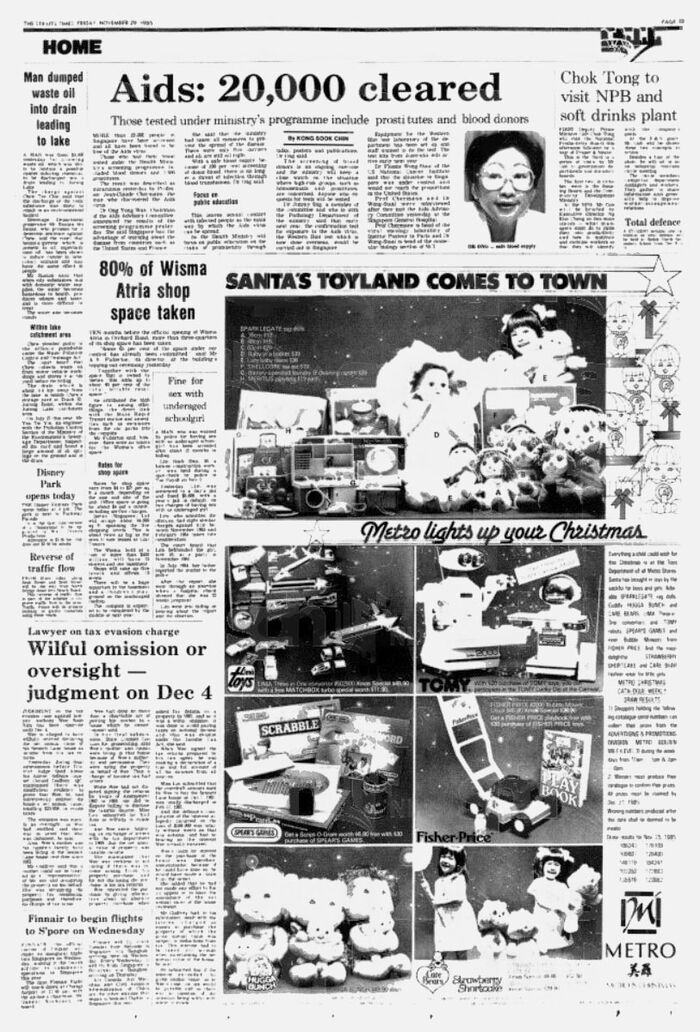 Those tested under ministry’s programme include prostitutes and blood donors

MORE than 20,000 people in Singapore have been screened and all have been found to be free of the Aids virus.

Those who had their blood tested under the Health Ministry’s screening programme included blood donors and 2,500 prostitutes.

The result was described as miraculous yesterday by Professor Jean-Claude Chermann, the man who discovered the Aids virus.

Dr Ong Yong Wan, Chairman of the Aids Advisory Committee, announced the results of the screening programme yesterday. She said Singapore had the advantage of learning about the disease from countries such as the United States and France.

She said that the ministry had taken all measures to prevent the spread of the disease. There were only five carriers and all are still all right.

With a safe blood supply, because of 100 per cent screening of donor-blood, there is no longer a threat of infection through blood transfusions, Dr Ong said.

This leaves sexual contact with infected people as the main way by which the Aids virus can be spread.

So the Health Ministry will focus on public education on the risks of promiscuity through talks, posters and publications, Dr Ong said.

The screening of blood donors is an ongoing exercise and the ministry will keep a dose watch on the situation where high-risk groups, such as homosexuals and prostitutes, are concerned. Anyone who requests for tests will be tested.

Dr Jimmy Sng, a member of the committee and who is with the Pathology Department of the ministry, said that early next year, the confirmation test for exposure to the Aids virus, the Western Blot test which is now done overseas, would be carried out in Singapore.

Equipment for the Western Blot test laboratory of the department has been set up and staff trained to do the test. The test kits from Australia will arrive early next year.

Dr Flossie Wong-Staal of the US National Cancer Institute said that the situation in Singapore was under control and would not reach the proportions in the United States.

Prof Chermann and Dr Wong-Staal were interviewed after they met the Aids Advisory Committee yesterday at the Singapore General Hospital.

Prof Chermann is head of the viral oncology laboratory of Institut Pasteur in Paris and Dr Wong-Staal is head of the molecular biology section of NCI.