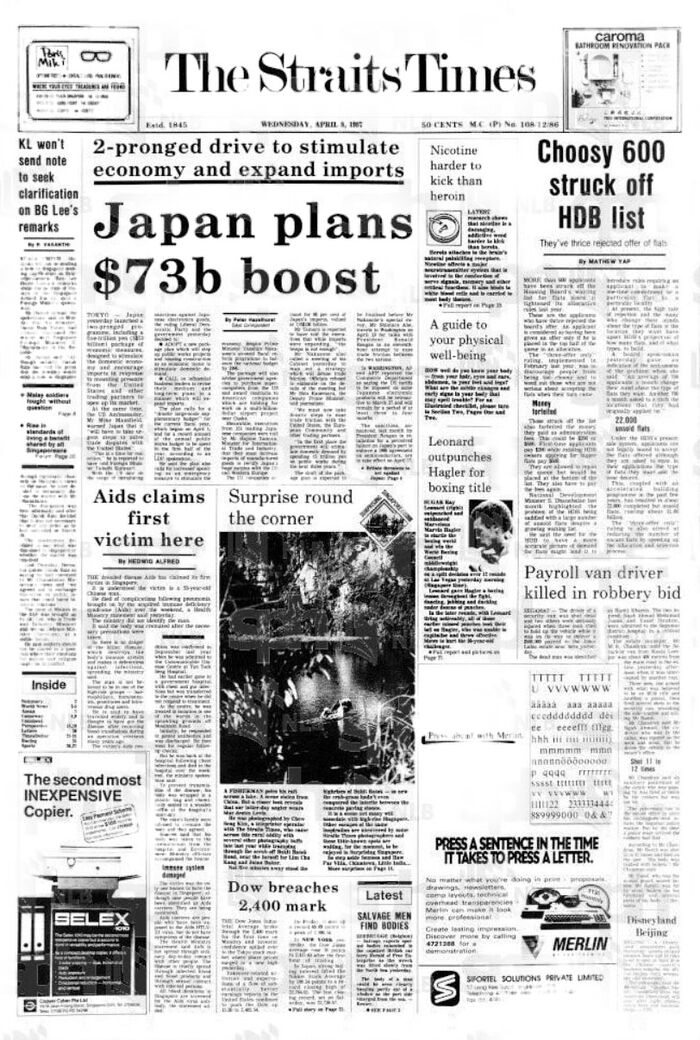 The dreaded disease Aids has claimed its first victim in Singapore.

It is understood the victim is a 55-year-old Chinese man.

He died of complications following pneumonia brought on by the acquired immune deficiency syndrome (Aids) over the weekend, a Health Ministry statement said yesterday.

The ministry did not identify the man.

It said the body was cremated after the necessary precautions were taken.

So there is no danger of the killer disease, which destroys the body’s immune system and makes it defenceless against infections spreading, the ministry said

The man is not believed to be in one of the high-risk groups - haemophiliacs, homosexuals, prostitutes and intravenous drug users.

He is said to have travelled widely and is thought to have got the disease after receiving blood transfusions during an operation overseas many years ago.

The victim's Aids condition was confirmed in September last year when he was admitted to the Communicable Disease Centre at Tan Tock Seng Hospital.

He had earlier gone to a government hospital with chest and gut infections but was transferred to the centre when he did not respond to treatment.

At the centre, he was treated in isolation in one of the wards in the sprawling grounds off Moulmein Road.

Initially, he responded to potent antibiotics and was discharged. He then went for regular follow-up checks.

But he was back at the hospital following chest infections and died in the hospital over the weekend, the ministry spokes man said.

To prevent transmission of the disease, his body was wrapped in a plastic bag and chemically sealed in a wooden coffin at the hospital's mortuary.

The man's family were advised to cremate the body and they agreed. Sources said that his body was taken to the crematorium from the hospital and Environment Ministry officials accompanied the hearse.

The victim was the only one known to have the disease in Singapore, although nine people have been identified as Aids carriers. They are being monitored.

Aids carriers are people who have been exposed to the Aids HTLV-III virus, but do not have symptoms of the disease.

All blood donations in Singapore are screened for the Aids virus antibody, the statement added.