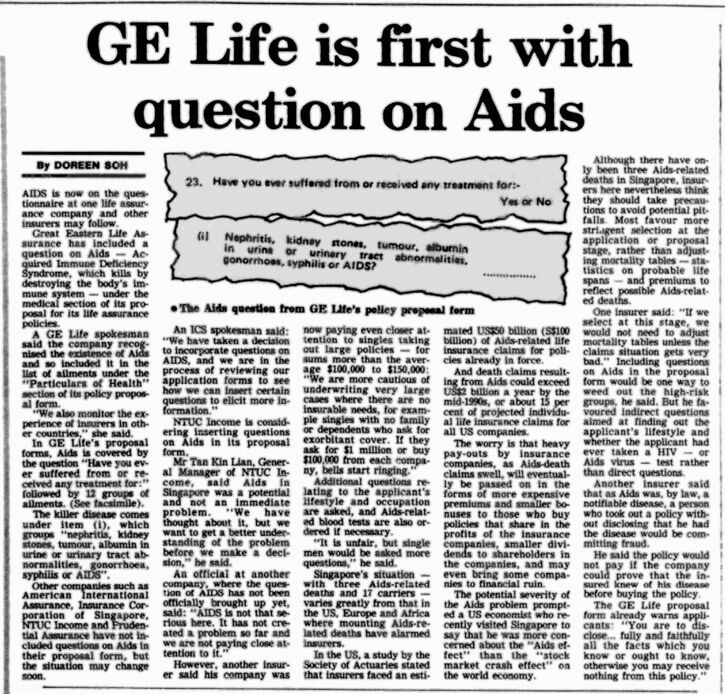 GE Life is first with question on Aids

AIDS is now on the questionnaire at one life assurance company and other insurers may follow.

Great Eastern Life Assurance has included a question on Aids - Acquired Immune Deficiency Syndrome, which kills by destroying the body's immune system - under the medical section of its proposal for its life assurance policies.

A GE Life spokesman said the company recognised the existence of Aids and so included it in the list of ailments under the “Particulars of Health” section of its policy proposal form.

“We also monitor the experience of insurers in other countries," she said.

In GE Life's proposal forms, Aids is covered by the question "Have you ever suffered from or received any treatment for:" followed by 12 groups of ailments. (See facsimile).

23. Have you tve/ «uflared from or received any treatment for:- Yes of No

Other companies such as American International Assurance, Insurance Corporation of Singapore, NTUC Income and Prudential Assurance have not included questions on Aids in their proposal form, but the situation may change.

An ICS spokesman said: "We have taken a decision to incorporate questions on AIDS, and we are in the process of reviewing our application forms to see how we can Insert certain questions to elicit more information".

NTUC Income is considering inserting questions on Aids in its proposal form.

Mr Tan Kin Lian, General Manager of NTUC Income, said Aids in Singapore was a potential and not an immediate problem. "We have thought about it, but we want to get a better understanding of the problem before we make a decision," he said.

An official at another company, where the question of AIDS has not been officially brought up yet, said: “AIDS is not that serious here. It has not created a problem so far and we are not paying close attention to it."

However, another insurer said his company was now paying even closer attention to singles taking out large policies - for sums more than the average $100,000 to $150,000; "We are more cautious of underwriting very large cases where there are no insurable needs, for example singles with no family or dependents who ask for exorbitant cover if they ask for $1 million or buy $100,000 from each company, bells start ringing."

Additional questions relating to the applicant's lifestyle and occupation are asked, and Aids-related blood tests are also ordered if necessary.

"It is unfair, but single men would be asked more questions," he said.

In the US, a study by the Society of Actuaries stated that insurers faced an estimated US$50 billion (S$100 billion) of Aids-related life insurance claims for policies already in force.

And death claims resulting from Aids could exceed US$2 billion a year by the mid-1990s, or about 15 per cent of projected individual life insurance claims for all US companies.

The worry is that heavy pay-outs by insurance companies, as Aids-death claims swell, will eventually be passed on in the forms of more expensive premiums and smaller bonuses to those who buy policies that share in the profits of the insurance companies, smaller dividends to shareholders in the companies, and may even bring some companies to financial ruin.

The potential severity of the Aids problem prompted a US economist who recently visited Singapore to say that he was more concerned about the "Aids effect" than the "stock market crash effect" on the world economy.

Although there have only been three Aids-related deaths in Singapore, insurers here nevertheless think they should take precautions to avoid potential pitfalls. Most favour more stringent selection at the application or proposal stage, rather than adjusting mortality tables - statistics on probable life spans and premiums to reflect possible Aids-related deaths.

One insurer said: "If we select at this stage, we would not need to adjust mortality tables unless the claims situation gets very bad." Including questions on Aids in the proposal form would be one way to weed out the high-risk groups, he said. But he favoured indirect questions aimed at finding out the applicant's lifestyle and whether the applicant had ever taken a HIV - or Aids virus - test rather than direct questions.

Another insurer said that as Aids was, by law, a notifiable disease, a person who took out a policy without disclosing that he had the disease would be committing fraud.

He said the policy would not pay if the company could prove that the insured knew of his disease before buying the policy.

The GE Life proposal form already warns applicants: "You are to disclose... fully and faithfully all the facts which you know or ought to know, otherwise you may receive nothing from this policy."