Archive of "Man picked up Aids from foreign prostitute", The Straits Times, 26 July 1989 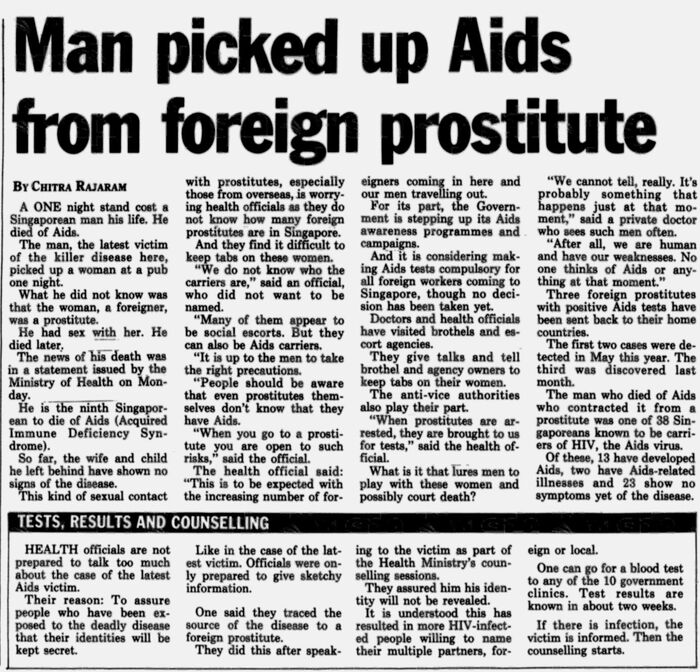 A ONE night stand cost a Singaporean man his life. He died of Aids.

The man, the latest victim of the killer disease here, picked up a woman at a pub one night.

What he did not know was that the woman, a foreigner, was a prostitute.

He had sex with her. He died later.

The news of his death was in a statement issued by the Ministry of Health on Monday.

He is the ninth Singaporean to die of Aids (Acquired Immune Deficiency Syndrome).

So far, the wife and child he left behind have shown no signs of the disease.

This kind of sexual contact with prostitutes, especially those from overseas, is worrying health officials as they do not know how many foreign prostitutes are in Singapore.

And they find it difficult to keep tabs on these women.

“We do not know who the carriers are," said an official, who did not want to be named.

“Many of them appear to be social escorts. But they can also be Aids carriers.

“It is up to the men to take the right precautions.

“People should be aware that even prostitutes themselves don’t know that they have Aids.

“When you go to a prostitute you are open to such risks," said the official.

The health official said: “This is to be expected with the increasing number of foreigners coming in here and our men travelling out.

For its part, tne Government is stepping up its Aids awareness programmes and campaigns.

And it is considering making Aids tests compulsory for all foreign workers coming to Singapore, though no decision has been taken yet.

Doctors and health officials have visited brothels and escort agencies.

They give talks and tell brothel and agency owners to keep tabs on their women.

“When prostitutes are arrested, they are brought to us for tests," said the health official.

What is it that lures men to play with these women and possibly court death?

“We cannot tell, really. It’s probably something that happens just at that moment,” said a private doctor who sees such men often.

"After all, we are human and have our weaknesses. No one thinks of Aids or anything at that moment."

Three foreign prostitutes with positive Aids tests have been sent back to their home countries.

The first two cases were detected in May this year. The third was discovered last month.

The man who died of Aids who contracted it from a prostitute was one of 38 Singaporeans known to be carriers of HIV, the Aids virus.

Of these, 13 have developed Aids, two have Aids-related illnesses and 23 show no symptoms yet of the disease.

HEALTH officials are not prepared to talk too much about the case of the latest Aids victim.

Their reason: To assure people who have been exposed to the deadly disease that their identities will be kept secret.

Like in the case of the latest victim. Officials were only prepared to give sketchy information.

One said they traced the source of the disease to a foreign prostitute.

They did this after speaking to the victim as part of the Health Ministry’s counselling sessions.

They assured him his identity will not be revealed.

It is understood this has resulted in more HIV-infected people willing to name their multiple partners, foreign or local.

One can go for a blood test to any of the 10 government clinics. Test results are known in about two weeks.

If there is infection, the victim is informed. Then the counselling starts.