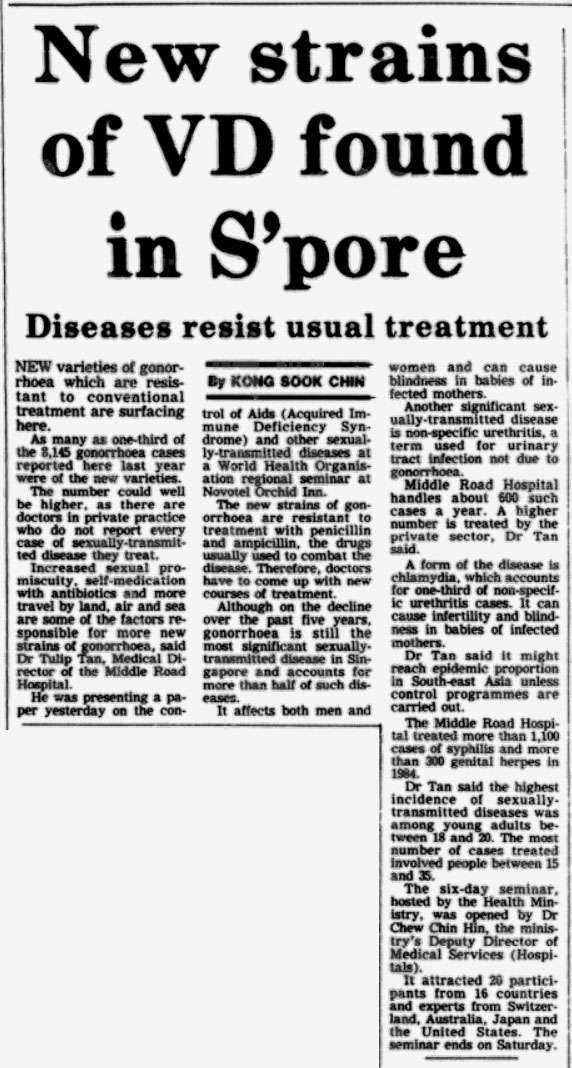 NEW varieties of gonorrhoea which are resistant to conventional treatment are surfacing here.

As many as one-third of the 8,145 gonorrhoea cases reported here last year were of the new varieties.

The number could well be higher, as there are doctors in private practice who do not report every case of sexually-transmitted disease they treat.

Increased sexual promiscuity, self medication with antibiotics and more travel by land, air and sea are some of the factors responsible for more new strains of gonorrhoea, said Dr Tulip Tan, Medical Director of the Middle Road Hospital.

He was presenting a paper yesterday on the control of Aids (Acquired Immune Deficiency Syndrome) and other sexually-transmitted diseases at a World Health Organisation regional seminar at Novotel Orchid Inn.

The new strains of gonorrhoea are resistant to treatment with penicillin and ampicillin, the drugs usually used to combat the disease. Therefore, doctors have to come up with new courses of treatment.

Although on the decline over the past five years, gonorrhoea is still the most significant sexually-transmitted disease in Singapore and accounts for more than half of such diseases.

It affects both men and women and can cause blindness in babies of infected mothers.

Another significant sexually-transmitted disease is non-specific urethritis, a term used for urinary tract infection not due to gonorrhoea.

Middle Road Hospital handles about 600 such cases a year. A higher number is treated by the private sector, Dr Tan said.

A form of the disease is chlamydia, which accounts for one-third of non-specific urethritis cases. It can cause infertility and blindness in babies of infected mothers.

Dr Tan said it might reach epidemic proportion in South-east Asia unless control programmes are carried out.

The Middle Road Hospital treated more than 1,100 cases of syphilis and more than 900 genital herpes in 1984.

Dr Tan said the highest incidence of sexually-transmitted diseases was among young adults between 18 and 20. The most number of cases treated involved people between 15 and 35.

The six-day seminar, hasted by the Health Ministry, was opened by Dr Chew Chin Hin, the ministry's Deputy Director of Medical Services (Hospitals).

It attracted 20 participants from 16 countries and experts from Switzerland, Australia, Japan and the United States. The seminar ends on Saturday.