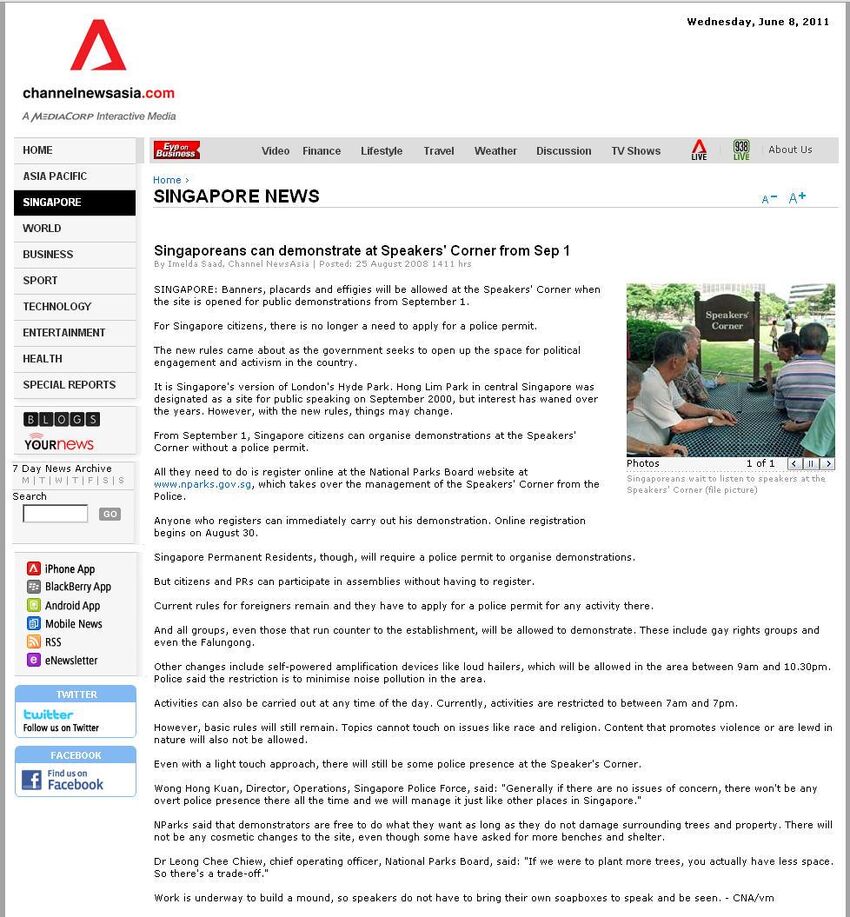 Singaporeans can demonstrate at Speakers' Corner from Sep 1

SINGAPORE: Banners, placards and effigies will be allowed at the Speakers’ Corner when the site is opened for public demonstrations from September 1.

For Singapore citizens/there is no longer a need to apply for a police permit.

The new rules came about as the government seeks to open up the space for political engagement and activism in the country.

It is Singapore's version of London's Hyde Park. Hong Lim Park in central Singapore was designated as a site for public speaking on September 2000, but interest has waned over the years. However, with the new rules, things may change.

From September 1, Singapore citizens can organise demonstrations at the Speakers' Corner without a police permit.

All they need to do is register online at the National Parks Board website at www.nparks.gov.sg, which takes over the management of the Speakers' Corner from the Police.

Anyone who registers can immediately carry out his demonstration. Online registration begins on August 30.

Singapore Permanent Residents, though, will require a police permit to organise demonstrations.

But citizens and PRs can participate in assemblies without having to register.

Current rules for foreigners remain and they have to apply for a police permit for any activity there.

And all groups, even those that run counter to the establishment, will be allowed to demonstrate. These include gay rights groups and even the Falungong.

Other changes include self-powered amplification devices like loud hailers, which will be allowed in the area between 9am and 10.30pm. Police said the restriction js to minimise noise pollution in the area.

Activities can also be carried out at any time of the day. Currently, activities are restricted to between 7am and 7pm.

However, basic rules will still remain. Topics cannot touch on issues like race and religion. Content that promotes violence or are lewd in nature will also not be allowed.

Even with a light touch approach, there will still be some police presence at the Speaker's Corner.

Wong Hong Kuan, Director, Operations, Singapore Police Force, said: "Generally if there are no issues of concern, there won't be any overt police presence there all the time and we will manage it just like other places in Singapore."

NParks said that demonstrators are free to do what they want as long as they do not damage surrounding trees and property. There will not be any cosmetic changes to the site, even though some have asked for more benches and shelter.

Dr Leong Chee Chiew, chief operating officer, National Parks Board, said: "If we were to plant more trees, you actually have less space. So there's a trade-off."

Work is underway to build a mound, so speakers do not have to bring their own soapboxes to speak and be seen.