Archive of "Three in S’pore found with Aids-linked virus", The Straits Times, 10 April 1985 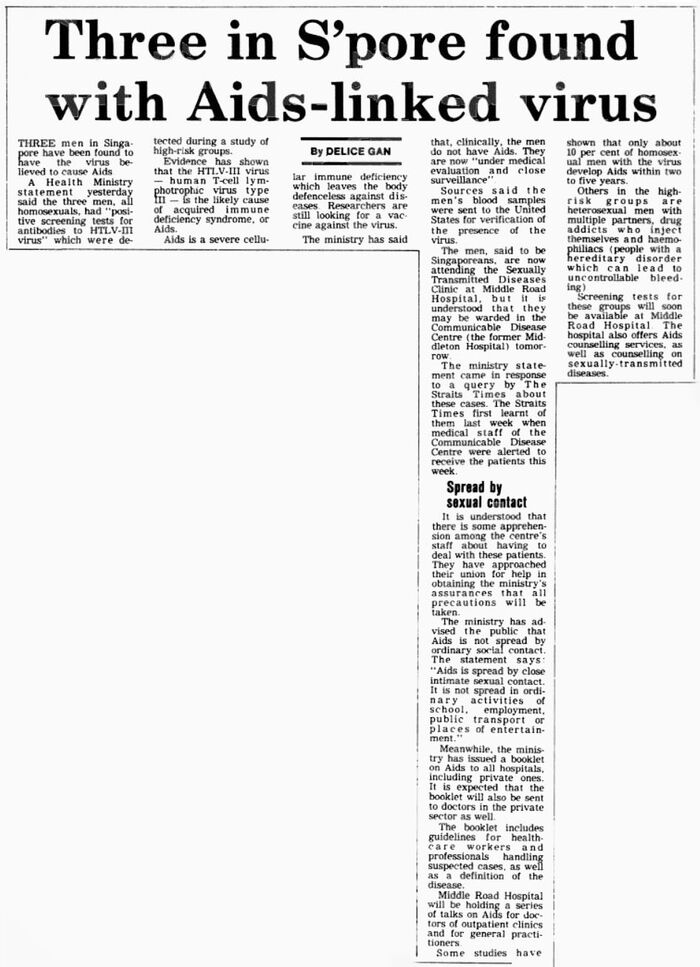 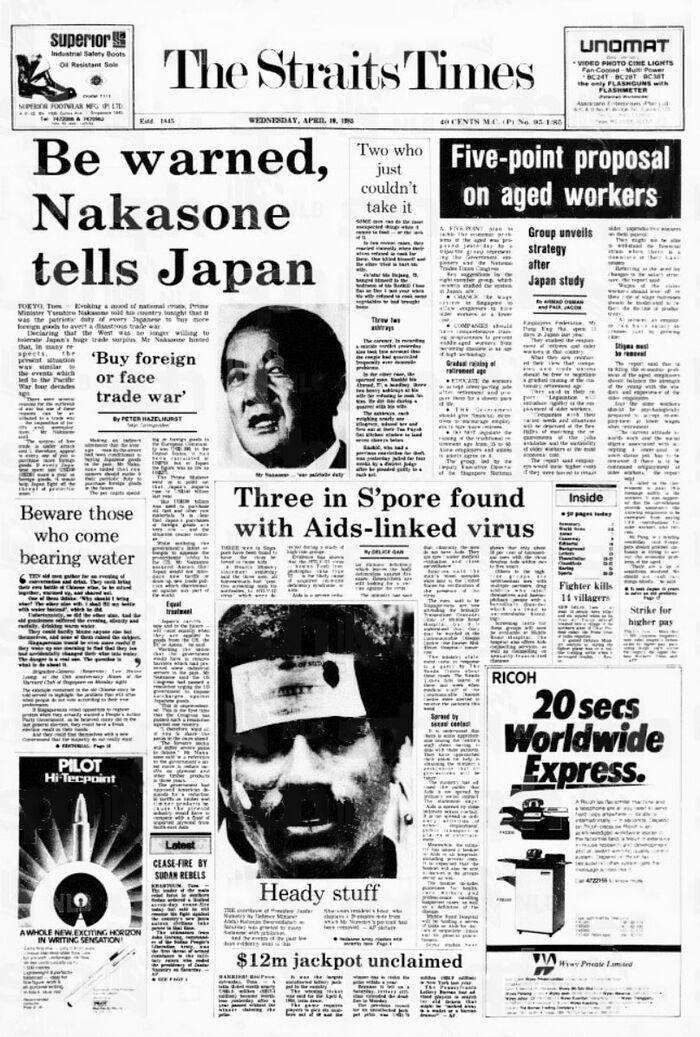 Three men in Singapore have been found to have the virus believed to cause Aids.

A Health Ministry statement yesterday said the three men, all homosexuals, had "positive screening tests for antibodies to HTLV-III virus" which were detected during a study of high-risk groups.

Evidence has shown that the HTLV-III virus - human T-cell lymphotrophic virus type III - is the likely cause of acquired immune deficiency syndrome, or Aids.

Aids is a severe cellular immune deficiency which leaves the body defenceless against diseases. Researchers are still looking for a vac cine against the virus.

The ministry has said that, clinically, the men do not have Aids. They are now “under medical evaluation and close surveillance".

Sources said the men’s blood samples were sent to the United States for verification of the presence of the virus.

The men, said to be Singaporeans, are now attending the Sexually Transmitted Diseases Clinic at Middle Road Hospital, but it is understood that they may be warded in the Communicable Disease Centre (the former Middleton Hospital) tomorrow.

The ministry statement came in response to a query by The Straits Times about these cases. The Straits Times first learnt of them last week when medical staff of the Communicable Disease Centre were alerted to receive the patients this week.

It is understood that there is some apprehension among the centre’s staff about having to deal with these patients. They have approached their union for help in obtaining the ministry’s assurances that all precautions will be taken.

The ministry has advised the public that Aids is not spread by ordinary social contact. The statement says: “Aids is spread by close intimate sexual contact. It is not spread in ordinary activities of school, employment, public transport or places of entertainment.”

Meanwhile, the ministry has issued a booklet on Aids to all hospitals, including private ones. It is expected that the booklet will also be sent to doctors in the private sector as well.

The booklet includes guidelines for healthcare workers and professionals handling suspected cases, as well as a definition of the disease.

Middle Road Hospital will be holding a series of talks on Aids for doctors of outpatient clinics and for general practitioners.

Some studies have shown that only about 10 per cent of homosexual men with the virus develop Aids within two to five years.

Others in the high-risk groups are heterosexual men with multiple partners, drug addicts who inject themselves and haemophiliacs (people with a hereditary disorder which can lead to uncontrollable bleeding).

Screening tests for these groups will soon be available at Middle Road Hospital. The hospital also offers Aids counselling services, as well as counselling on sexually-transmitted diseases.