The cover story of the 19 March 2001 issue of Time magazine was Sex in Asia[1]. It comprised a number of articles, each one focusing on a different country. There was a story about a single man in Hong Kong bar-hopping for heterosexual sex...and failing to find it. Other vignettes described prostitution by teenage girls in Japan, gigolos in Shanghai, katoeys and sex change operations in Bangkok, and so on.

The main gay story featured Singapore. It interviewed Kelvin Wong and published a large a photograph of him. There was another article on homosexuality in Taipei, about cyber encounters and rough sex which led to the death of a 20 year-old accountancy undergraduate. 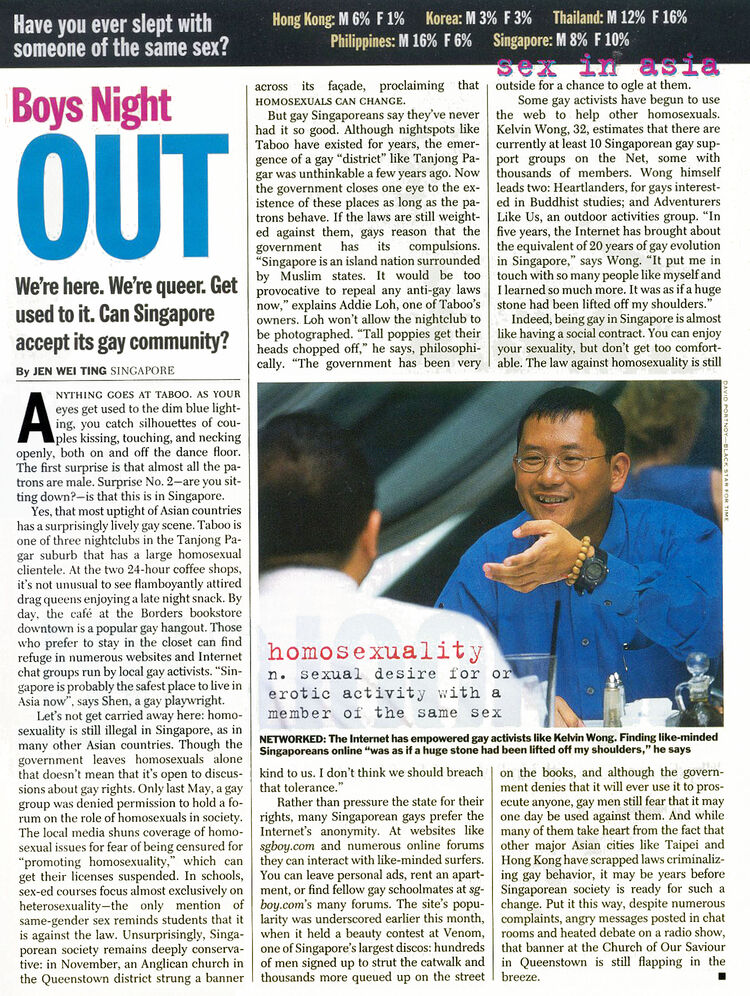 We're here. We're queer. Get used to it. Can Singapore accept its gay community?

Anything goes at Taboo. As your eyes get used to the dim blue lighting, you catch silhouettes of couples kissing, touching, and necking openly, both on and off the dance floor. The first surprise is that almost all the patrons are male. Surprise No. 2 - are you sitting down? - is that this is in Singapore.

Yes, that most uptight of Asian countries has a surprisingly lively gay scene. Taboo is one of three nightclubs in the Tanjong suburb that has a large homosexual clientele. At the two 24-hour coffee shops, it's not unusual to see flamboyantly attired drag queens enjoying a late night snack. By day, the cafe at the Borders bookstore downtown is a popular gay hangout. Those who prefer to stay in the closet can find refuge in numerous websites and Internet chat groups run by local gay activists. "Singapore is probably the safest place to live in Asia now", says Shen, a gay playwright.

Let's not get carried away here: homosexuality is still illegal in Singapore, as in many other Asian countries. Though the government leaves homosexuals alone that doesn't mean that it's open to discussions about gay rights. Only last May, a gay group was denied permission to hold a forum on the role of homosexuals in society. The local media shuns coverage of homosexual issues for fear of being censured for "promoting homosexuality," which can get their licenses suspended. In schools, sex-ed courses focus almost exclusively on heterosexuality - the only mention of same-gender sex reminds students that it is against the law. Unsurprisingly, Singaporean society remains deeply conservative: in November, an Anglican church in the Queenstown district strung a banner across its facade, proclaiming that HOMOSEXUALS CAN CHANGE.

But gay Singaporeans say they've never had it so good. Although nightspots like Taboo have existed for years, the emergence of a gay "district" like Tanjong Pagar was unthinkable a few years ago. Now the government closes one eye to the existence of these places as long as the patrons behave. If the laws are still weighted against them, gays reason that the government has its compulsions. "Singapore is an island nation surrounded by Muslim states. It would be too provocative to repeal any anti-gay laws now," explains Addie Low, one of Taboo's owners. Low won't allow the nightclub to be photographed. "Tall poppies get their heads chopped off," he says, philosophically. "The government has been very kind to us. I don't think we should breach that tolerance."

Rather than pressure the state for their rights, many Singaporean gays prefer the Internet's anonymity. At websites like sgboy.com and numerous online forums they can interact with like-minded surfers. You can leave personal ads, rent an apartment, or find fellow gay schoolmates at sgboy.com's many forums. The site's popularity was underscored earlier this month, when it held a beauty contest at Venom, one of Singapore's largest discos: hundreds of men signed up to strut the catwalk and thousands more queued up on the street outside for a chance to ogle at them.

Some gay activists have begun to use the web to help other homosexuals. Kelvin Wong, 32, estimates that there are currently at least 10 Singaporean gay support groups on the Net, some with thousands of members. Wong himself leads two: Heartlanders, for gays interested in Buddhist studies; and Adventurers Like Us, an outdoor activities group. "In five years, the Internet has brought about the equivalent of 20 years of gay evolution in Singapore," says Wong. "It put me in touch with so many people like myself and I learned so much more. It was as if a huge stone had been lifted off my shoulders."

Indeed, being gay in Singapore is almost like having a social contract. You can enjoy your sexuality, but don't get too comfortable. The law against homosexuality is still on the books, and although the government denies that it will ever use it to prosecute anyone, gay men still fear that it may one day be used against them. And while many of them take heart from the fact that other major Asian cities like Taipei and Hong Kong have scrapped laws criminalizing gay behavior, it may be years before Singaporean society is ready for such a change. Put it this way, despite numerous complaints, angry messages posted in chat rooms and heated debate on a radio show, that banner at the Church of Our Saviour in Queenstown is still flapping in the breeze.

Have you ever slept with someone of the same sex?

The editable text of the article and Time magazine link were first posted on SiGNeL by Alex Au:[3]. The article was scanned by Kelvin Wong and further processed by Roy Tan who wrote this wiki article.