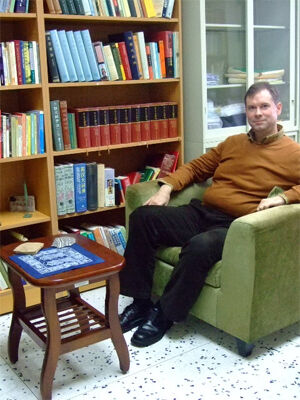 Bret Hinsch is an openly gay American academic whose research interests and publications include history, East Asian languages, psychology and human sexuality. He is perhaps best known for his treatise on homosexuality in Chinese history entitled, "Passions of the Cut Sleeve, The Male Homosexual tradition in China". He currently works and lives in Taipei, Taiwan.

Hinsch was born in 1963 in Dallas, Texas. He is an Associate Professor of History at National Chung Cheng University and has lived for over two decades, since 1992, in Taipei, Taiwan.

In an interview with Singapore's English-language LGBT web portal, Fridae, in 2002, Hinsch revealed that he initially wanted to be a biologist but gave up that dream after finding that it required a lot of mathematics. He ended up studying Chinese history because he happened to take an interesting class on Chinese philosophy during his freshman year in college. He loved it so much that he started studying Chinese. It was a total coincidence that he happened to take a class that changed his life. Sometimes we make the most important decisions in life for the most trivial reasons.

Hinsch came out to his family when he was 18 years old. Coming out was tense - his parents were conservative Texan republicans and were shocked at first. But they quickly got used to the idea. Things improved and they got along very well with his lover. He gets the impression that his mother enjoys talking more to his Taiwanese partner Allen than to himself whenever she telephones them. In 2002, he had been together with Allen for 16 years and lived with him.

His only encounter with homophobia was when he was a graduate student living in Boston and someone threw a rock through my bedroom window. The day before, one of his neighbors had seen him embracing his lover as their windows faced each other across an alley. The neighbour did not look too pleased to see two men hugging and Hinsch suspects that it was this neighbour who threw the rock. He considers himself lucky that it was the only overt prejudice he had ever experienced.

When he was in college, his role model, Professor John Boswell, was gay and proud. His example had a profound influence on Hinsch. Boswell was a superb teacher - smart, witty, dedicated, and a very warm human being. It showed him that an openly gay man could succeed in the academic world and change his students' lives.