Buddhism in Singapore and homosexuality

On Thursday, 24 July 2014, Buddhist monk Ajahn Brahm after giving a talk to a room of about 2000 people at the Chui Huay Lim Club at 190 Leng Kee Road responded to a question from the floor on the Buddhist position on homosexuality by saying:

I'm a Buddhist monk and I have performed a gay marriage for a couple in Norway. I was very proud to be able to do that. There is nothing in the sutras, in the teachings of the Buddha, which discriminates against anybody on the basis of race, religion,or sexual orientation.

I'd also like to point out that when you discriminate against someone and force them to suppress their natural sexuality, it causes terrible, terrible harm in terms of stress and health. It is recognised in many places in the west that this harm hurts the whole community.

Many years ago, a leader of the gay community in Perth came to me and he said with such pain in his heart, "Religion has been so cruel to the gay community." And when he said that, you could feel his pain and that went right into my heart. I never forgot that. How it hurt him to the core for years. 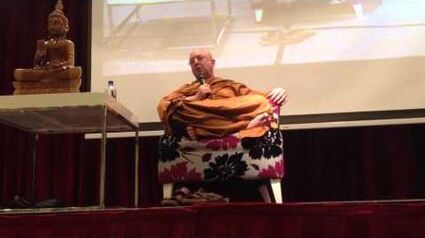