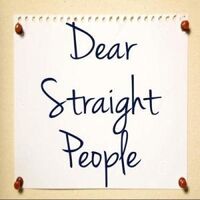 Dear Straight People is an LGBT website based in Singapore. It was launched in July 2015 by Sean Foo, a young adult journalist and aims to provide positive and engaging content that brings people of all sexualities together.

Since its inception, Dear Straight People has become renowned for its coming out stories which are written as feature pieces. Many of these articles have gone viral online, receiving thousands of shares on social media. Dear Straight People has also branched out into YouTube, and has had some of its videos featured on international LGBT publications such as Gay Star News and Queerty.