GT Lye is a well known, veteran Peranakan female impersonator. He made a stage comeback in 2017.

On 4 August 2017, a TODAY newspaper article by Cassandra Wong reported that GT Lye, then 79, would be making a comeback for his swansong play[1]:

SINGAPORE — Veteran Peranakan stage actor and female impersonator GT Lye, 79, will return to the stage after a 12-year hiatus — and it could possibly be his final curtain call.

He will again be taking on the role of the matriarch Bibik Bisu who has to contend with her eldest son’s two wives. Female impersonators Kelvin Tan, 48, and Lee Yong Ming, 61, will also grace the stage along with Lye, playing the roles of maids.

The production is a sequel to Menyesal (Regret) that was staged in 1986. Dua Mungka was written by Frederick Soh over two months, who later consulted Lye on the “spoken structure” of the Peranakan language. Soh will also play Bibik Bisu’s eldest son, Chong Guan.

(The cast of Double-Faced. Photo: GSA)

“I think it will be very nostalgic for the audience because ultimately, they haven’t seen him (Lye) for 12 years... Also, the younger generation has a lot of interest in Peranakan culture,” said Soh during a media conference earlier this week.

Lye said the play could possibly be his “swan song”. 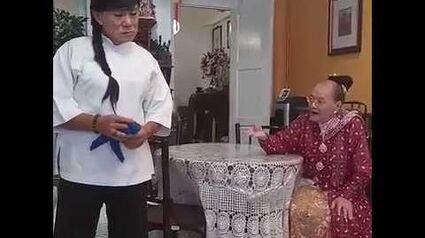 He said: “My health has not been very good; anything can happen.” But he later told TODAY that he will carry on as long as “his health permits”. These days, he is also busy hosting fashion shows, making appearances on radio talks, cooking demonstrations and producing an upcoming 50-episode podcast about the Peranakan language.

So far, he has completed the scripts for 30 episodes of GT Lye Podcast, which was done “within a month”. His co-host in the series is his 49-year-old grandniece.

Every episode will include a skit that Lye will act alongside paid actors, as well as explanations about the dialogue, Peranakan festivals, and proverbs. He also has plans to convert these into a book.

The first recording will take place sometime after the conclusion of the production.

Lye’s first stage experience was in 1984 as a male character in a Peranakan play by GSA called Pileh Menantu (Selecting daughter-in-law). He took on his first matriarch character in 1985 in Buang Keroh Pungot Jernih.

Kain Chik Dua Mungka (Double-Faced) will be staged at The Drama Centre from Aug 24 to 26, in Peranakan patois with English subtitles. Aug 24 is invitation-only. Tickets range from S$48 to S$68, excluding the Sistic handling fee and GST.

A follow-up article was published in TODAY newspaper on 19 August 2017[3]:

SINGAPORE – Veteran stage actor GT Lye is one of Singapore theatre’s Dr Jekyll and Mr Hyde – by his own admission – except, his alternate persona is a Peranakan matriarch. His roles as a female impersonator have made a name for him, and he has dedicated over 30 years of his life to the art form. 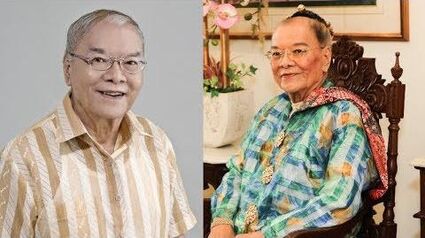 Now, all it takes is an hour for Lye to transform into a woman for the stage, and a mere three minutes to change outfits between scenes. Lye takes to familiar ground again as matriarch Bibik Bisu in Gunong Sayang Association’s (GSA) upcoming production Kain Chik Dua Mungka (Double-Faced) on Aug 25 and 26 – and it could possibly be his “swan song”.

He is, after all, 79 years old and his health “has not been very good. Anything can happen”, as he told media at a press conference earlier this month.

Lye is among only about five Peranakan female impersonators in Singapore. Two others, Lee Yong Ming, 61, and Kelvin Tan, 48, will also feature in Kain Chik Dua Mungka.

On why women have not played Peranakan matriarchs as successfully, Lye quipped: “I think female impersonators will do better, generally. Ladies will be shy to portray certain aspects of life… but impersonators will not think twice as long as it’s genuine, we will do it.”

HOW IT ALL BEGAN

Lye’s first foray into female impersonation in 1985 came by through pure coincidence. The team behind Buang Keroh Pungot Jernih could not find a good actress to play the role of a matriarch, so he decided to volunteer. Initially, his decision was met with scepticism. It was only his second stage performance, and his first in 1984 was of a father figure.

“On my first day of dressing up, just dressing up was enough to prove to them there was nothing amiss — it was a real complete matriarch. So that’s how history began for me,” said Lye, referring to the attention to detail he had put in to show the meticulousness typical of nyonyas.

Since then, he has only ever taken on female roles.

His ability to “transform to the fullest” is through his lifelong experience being surrounded by – and taking a keen interest in – the matriarchs that streamed through his home: “the rich, the poor, the good, the bad, the ugly, the scandalous”, as he described them.

“(From) the age of 11, I have always opened my eyes and ears to the beautiful hairdos, the crispy baju panjang (Peranakan long dress), the beautiful kasut manek (Peranakan beaded slippers) since childhood... Because they (the matriarchs) are very fastidious (in) the way they speak, the way they deliver the language and who they are speaking to. It differs from one matriarch to another,” said Lye.

He studied their mannerisms carefully through the years, and that understanding has played a critical part in his ability to play the roles of traditional Peranakan women.

“I have experienced life with these kinds of people… I am delivering something that you cannot see (regardless of) how money you pay... it’s all in the past, the genuine characters which nowadays, because of modernisation, you won’t be able to see that ever again,” he explained.

FROM BABA TO STAGE NYONYA

The sarong, inner blouse and baju panjang must first be ironed and hung properly — by Lye himself. The fragility of the clothes means they cannot be ironed “too hot” and just like how the fastidious matriarchs of the past liked them, they also cannot be wrinkled. Most of the accessories for his characters, such as handkerchiefs, antique brooches and jewellery, are also from Lye’s own private collection. 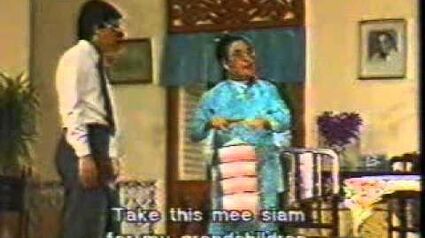 “The change of scenes, I have to be quick. But through years of experience on the stage, I can manage to change my whole outfit in three minutes — that’s my fastest record. It’s not easy, especially the tying. It’s not ready made that I can just wear like that — I have to fold it, I have to put on my belt, I have to put my silver purse where I put the money and my key chain. All these take time,” Lye shared.

The one thing Lye is not in control of: The application of makeup — the finishing touches like adding the blusher, foundation, lipstick and pencilling of eyebrows are done by a makeup artist.

“I know myself, I am very ugly. The transformation is very different. It’s very important to have a professional to change my look from a beast to a beauty,” he explained.

Lye is insistent, however, that the GT Lye off-stage is not a nyonya. When not on the job, Lye can be found in regular male attire, typically in shirts and pants. “GT Lye is (Dr) Jekyll and Mr Hyde,” as he succinctly puts. 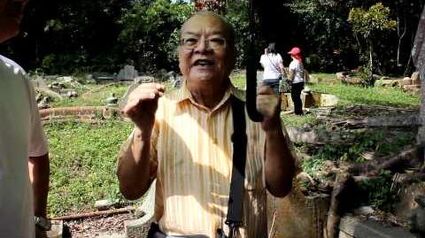 Kain Chik Dua Mungka (Double-Faced) will be staged at The Drama Centre from Aug 25 to 26, in Peranakan patois with English subtitles. Tickets range from S$48 to S$68, excluding the Sistic handling fee and GST.