The Bugis people are the most numerous of the three major ethnic groups of South Sulawesi, Indonesia.

Bissus are seen as being both male and female at the same time, whereas calabai and calalai start out as either male or female and then adopt the opposite gender’s role. Bissus are either born with both genitalia at once, or if they only have the genitalia of one gender, their souls are seen as the opposite sex. In this sense, technically calabais and calalais can be bissus as well, if they wish to be.

Due to their duality, bissus are also seen as the go-between for humans and deities. A Bugis creation myth recounted that bissus were among the first beings on earth.

“You ask how this world came to be? Well let me tell you. Up there in the heavens, the gods decided they would bring life to this lonely planet. They therefore sent down one of their most aspiring deities, Batara Guru. But Batara Guru was not good at organizing things. To do all of this, two bissu were needed. So the gods sent down two bissu who flanked Batara Guru as he descended. And when they arrived, the bissu set about making everything blossom; they created language, culture, customs, and all of the things that a world needs if it is going to blossom. That’s how the world began you see.” – Haj Bacco, for the International Institute for Asian Studies

Another tale claimed that bissus have supernatural qualities due to them being both male and female and mortal and deity.

“Long ago, a man named Sarawigading wanted to marry a woman named WeCudai, but WeCudai lived on an island in the middle of a huge lake. The only way to get there is by boat, and Sarawigading didn’t have one. There was a big tree by the lakeside, so he decided to cut it down and try to make a boat out of it. But the tree was too big, and tried as he might he couldn’t cut it down. Sarawigading burst into frustrated tears and cried long into the night, as the situation seemed terribly hopeless. However, a bissu in the heavens heard him cry and descended to help him. “Please don’t worry, I will cut down the tree and help you make a boat,” said the bissu, and s/he managed to fell the huge tree as s/he had the strength of both man and woman, and mortal and deity.” – Old Bugis narrative from IIAS, edited for clarity

In some ways, bissus are seen as shamans, as they are believed to be the only humans able to be possessed by spirits. To do this, a bissu must have good connections with the spirit world. They have to combine male and female attributes through their clothing – a bissu may carry a man’s knife (badi’) but wear flowers in his/her hair. Not just anybody can be a bissu.

Note the male and female elements in the costume. Img from Akkadium College.

Note the male and female elements in the costume. Img from Akkadium College

If a child showed an affinity to the spirit world by the time he/she is 12, he/she will be groomed to become a bissu. Traditionally, bissus were required to memorize sacred Bugis texts as well as go through life-threatening inauguration rituals. One of them requires the bissu-to-be to lie on a bamboo raft in the middle of a lake for 3 days and 3 nights without eating, drinking or moving. If he/she survives this and wakes from his/her trance fluent in the sacred bissu language, he/she will then be accepted as a bissu.

A bissu then becomes an important part of society, with some becoming VIPs in royal courts and given their own land and rice fields. Besides having to keep royal regalia and give spiritual advice to the king, a bissu’s main role is to bestow blessings on almost every aspect of the Bugis community’s life… from rice planting, marriages, building a house, or blessing people going to Mecca on a pilgrimage.

Bissu is one of the five genders of the Bugis, an Indonesian ethnic group. There are divergent theories regarding the definitive origins and meaning of "gender transcendent", as the bissu are commonly called[1].

To be considered bissu, all aspects of gender must be combined to form a whole. This can include those who are born intersex. However, being bissu does not necessarily mean one does not possess only fully functioning male or female sexual organs, or even that one would not be called a cisgender male or female outside of Bugis society[2],[3].

The role of the bissu (along with the other gender roles not normally found in Western society) exist in Bugis society because it is a cultural belief that all five genders must harmoniously coexist.

The advice of bissu is typically sought when a particular approval from the powers of the batin world is required. This may, for example, be the situation when a Bugis person is departing Sulawesi for the Hajj, the compulsory pilgrimage to Mecca. In that situation the bissu will permit an excellent djinn to seize them and to proceed as an emissary of the batin.

This is not in keeping with traditional Islam, but it has been tolerated by the regional Muslim establishment on condition that it does not comprise any act that is evidently in opposition to the Sharia. In this exceptional case, it means that the spirit and the Bissu's powers should not be measured as in any way autonomous from Allah’s power, because he is the only one who is to be venerated.

In daily social life, the bissu, along with the calabai and the calalai, are authorized to enter the women’s parts of the dwellings and villages in addition to the men's.

According to the Bugis gender system, a calabai is a 'false woman'. Therefore, these people are generally assigned male at birth but take on the role of a heterosexual female. The fashions and gender expression of calabai individuals are distinctly feminine, but do not match that of the "typical" cisgender woman.

If there is to be a wedding in Bugis society, more often than not calabai will be involved in the organization. When a wedding date has been agreed upon, the family will approach a calabai and negotiate a wedding plan. The calabai will be responsible for many things: setting up and decorating the tent, arranging the bridal chairs, bridal gown, costumes for the groom and the entire wedding party (numbering up to twenty-five), makeup for all those involved, and all the food. Rarely did I attend a village wedding with less than a thousand guests. On the day, some calabai remain in the kitchen preparing food while others form part of the reception, showing guests to their seats.

A calalai is a person who is assigned female at birth but takes on the roles of a heterosexual male. Calalai dress and present as men, hold masculine jobs, and typically live with female partners to adopt children.

In 2008, National Geographic produced a documentary on the five genders in Bugis society[4]: 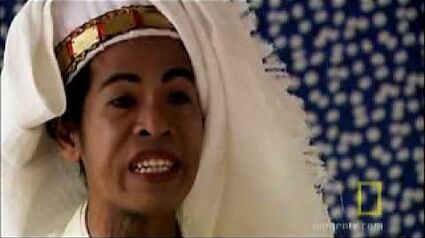