The Hikayat Panji Semirang (Tale of Prince Semirang) is an epic poem - a classic work of literature in the Malay and Indonesian languages still extant today. The story derives from the Hindu-based folklore of East Java and the poem dates from the 14th century. Its author, however, is unknown.

The hikayat recounts the adventures in the ancient Malay archipelago of a sexually fluid Javanese princess, Galuh Candra Kirana, who cross-dresses and assumes the identity of a warrior-prince, Panji Semirang. The work provides a string of moral vignettes, traverses gender boundaries in a matter-of-fact way and contains numerous references to cinta sejenis (homosexual love).

Hikayat (also hikâyet) is a literary term of the peoples of the Near and Middle East and Southeast Asia[1]. In a broad sense, a hikayat is any long narrative work in prose or sometimes in verse. In a narrow sense, it is an anonymous work of prose in book form, such as the 17th-century Malay classic, The Tale of Hang Tuah. In Arabic, Persian, and Turkish literature, the term is synonymous with “short story.” In Turkish literature, it also refers to an anonymous folk story.

Panji (formerly spelt "Pandji"), or Apanji, is an old title whose use has fluctuated through the ages[2]. In the 14th and 15th centuries in the Majapahit Kingdom of East Java, it was a title of a prince of the blood. So, the hero who appeared in romantic tales written during this period or shortly afterwards was given the title "Panji". However, it is always a title given to a protagonist and not an antagonist.

The life of the protagonist of these Panji tales forms the basis of a cycle of Javanese stories.[3]. Along with the Ramayana and Mahabharata, this cycle is the basis of various poems and a genre of Javanese wayang (shadow puppetry) known as wayang gedog ("gedog" meaning "mask"). Panji tales have also spread from East Java to become a fertile source of literature and drama throughout Malaysia, Thailand, and Cambodia.

The Hikayat Panji Semirang has now become one of the important sources for the study of Malay language and literature. Research material can be found in the Department of Oriental Studies, National Library, Berlin, Germany as well as online (see below).

The following photos depict the manifold modern manifestations of the Hikayat Panji Semirang. The tale has also been retold in the form of novels in contemporary Malay and Indonesian, and even translated into Thai, in comics, theatrical and dance productions, television series and animated cartoons. 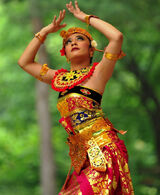 A synopsis in English of the saga is provided here based on the excellent article by Sophiesue on Blogger:[13]. A slightly different version is available on Wikipedia:[14]. For a video lecture in which socio-political scientist and historian Dr. Farish Noor of Nanyang Technological University (NTU) summarises the story, see:[15].

Hikayat Panji Semirang is perhaps the most popular amongst the many Panji tales. It lays down the foundational myth of the people and kingdoms of Java. It begins with the descent from the heavenly kingdom of 4 semi-divine princes and princesses (Ratu; applicable to both genders) who establish their own respective kingdoms on earth - Ratu Kuripan, Ratu Daha, Ratu Gegelang and Ratu Biku Gandasari. Among the four semi-divine rulers, it is Ratu Biku Gandasari who is most loved by the god Sang Hjang Djaganata. She is rewarded by him with supernatural powers, including an omniscient knowledge of all that happens on earth.

The central character of the tale is the Princess Galuh Candra Kirana. She is the daughter to Ratu Daha, the King of Daha. Ratu Daha has a wife, Ratu Puspa Ningrat and two consorts (gundik)- Mahadewi and his favourite, Paduka Liku. Paduka Liku's daughther was the Princess Galuh Adjeng, while Galuh Candra Kirana is the daughter of the consort Mahadewi.

The relationship between the two princesses, Galuh Candra Kirana and Galuh Adjeng, grows increasingly problematic over time, with both of them competing for the love and attention of their father Ratu Daha. Candra Kirana is eventually courted by the Prince of Kuripan, Raden Inu Kartopati. This angers her half-sister Galuh Adjeng even more, and the latter begins to plot against her.

Finally, Paduka Liku and Galuh Adjeng manage to convince Ratu Daha that Candra Kirana is guilty of treason againgst her father. Having incurred the wrath of Ratu Daha, Candra Kirana is sent into exile by her father, the king. Before that, she is brought to the court, publicly chastised and her hair is cut by him. Having been stripped of her courtly title and honours, Candra Kirana flees from the place and the kingdom of Daha along with her mother, Mahadewi.

In the wilderness, Candra Kirana vows to redeem herself and begins her life anew. With her hair cut short, she decides to assume the identity of a man and declares that henceforth, she will be known as the forlorn Prince Raden Panji Semirang Asmarantaka. She dons the attire of a prince and arms herself. Relocating to the frontier between the Kingdom of Daha and Kuripan, she establishes her own kingdom. Candra Kirana soon attracts a large number of followers who emigrate there, although none of her (his) subjects realise that Panji is in fact a woman in disguise.

Ultimately, Panji is also forced to confrant the prince of Kuripan, Raden Inu Kartopati in battle. The combat between the two ends in a stalemate as both are attracted to each other and fall in love, the latter assuming that Panji is actually a man. The homosexual love affair between Raden Inu and Panji comes to an untimely end as Panji is forced to flee the court of Kuripan. Having lost his (male) lover, Raden Inu is asked by his father Ratu Kuripan to marry the princess Galuh Adjeng of Daha instead, who happens to be the sister of Galuh Candra Kirana (Panji Semirang). Despite agreeing to the marriage, Raden Inu pines for his beloved Panji, whom he still takes to be a man.

Panji in turn takes her (his) retinue and settles on the slopes of Mount Wilis, where they encounter the princess Biku Gandasari, one of the semi-divine primal ancestors who were among the first to descend from Kayangan and populate Jawa. Ratu Biku Gandasari counsels Panji and her retinue, before setting them on the path down to the peopled valleys and lowlands. Once again Panji (Galuh Candrakirana) assumes the identity of a man, this time as an entertainer, Gambuh Warga Asmara. Meanwhile Raden Inu, who is unable to consummate his marriage with Galuh Adjengdue due to his love for Panji, also flees the court in search of his male lover. He too assumes another identity, as the prince Pangeran Panji Djajeng Kesuma.

Eventually Raden Inu (as Pangeran Panji Djajeng Kesuma) meets with his beloved Panji, who has now taken on the form of a male performer, Gambuh Warga Asmara. Struck by the familiar apprearance of Gambuh Warga Asmara, Raden Inu fervently courts her (him). Finally it is revealed that Gambuh Warga Asmara (Panji Semirang) is actually Galuh Candra Kirana and the two lovers are reunited.

The Hikayat ends with Galuh Candra Kirana reassuming her identity as a woman and Pangeran Pani Djajeng Kesuma reprising his identity as Raden Inu. Forsaking the kingdom of Daha, they both return to Kuripan and rule the kingdom together.

The popularity of the Hikayat Panji Semirang since the 14th century and the folklore-based Panji tales is evidence that gender fluidity and homosexual love were well accepted in Indonesia, Malaysia and throughout South-East Asia during the pre-Islamic and pre-colonial eras. (For a lecture by socio-political scientist and historian Dr. Farish Noor of Nanyang Technological University on how the Panji stories attempt to encapsulate Hindu cosmology and explain sexual diversity, see the video:[16]).

The recent heightened intolerance of gender boundary infringement and homosexual relationships is a recent phenomenon and not based on the traditional culture of the Malayo-Indonesian archipelago.