The following photographs of Inner Circle were shot in October 1994: 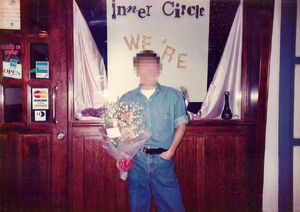 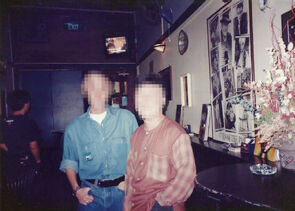 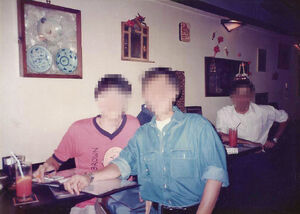 A gay Singaporean Chinese entrepreneur named Kent Low opened the pub in 1991 with a business partner to cash in on the popularity of the seminal Babylon, Singapore's first gay karaoke pub situated just a few shophouses away, at 52 Tanjong Pagar Road.

In July 2019, Low agreed to an interview with journalist William Hoo of Rice media[1]. At Low's request, they met on a Friday night after work at Outbar, one of the fine establishments, also catering to a gay clientele, along Neil Road. It took a while before Hoo spotted him, dressed in a beige sweater, with a singular shiny ear stud, already seated and already drinking under the dazzling lights. Intermittently, a friend of Low’s would walk by, or there would be someone that he greeted whom he introduced to Hoo.

Mike, the manager of Outbar and Low’s friend, jokingly introduced himself as the resident ‘courtesan’ or 舞女 in turn and offered to help with the questions. For the rest of the night, he flitted to and fro from the rest of the patrons and their table, lubricating the social hinges with charm and wit. Another friend, more drunk than the rest, introduced himself to Hoo twice over the course of the night and repeatedly asked to try on his earrings. At various points, Hoo was chided for forgetting to toast the table, when he tried to surreptitiously sip his drink in a bid to calm his nerves. Between the entertaining and the booming music, Low told Hoo about Inner Circle.

When it opened in 1991 along Tanjong Pagar Road], it was during a time when overt advertising of a gay establishment was unacceptable and would have drawn unnecessary attention from the public or perhaps authorities. In its early days, the nascent KTV relied on word-of-mouth in order to flourish. But as the “PR person” of the venture, Low had other tricks up his sleeve. “My singer friends from Hong Kong flew in to support us,” he recounted. “People would excitedly ask me if they were coming, sometimes weeks before in anticipation.” And in this way, the hype was sustained by word-of-mouth and got business to boom, with the KTV fully packed. In its heyday, the crowd was “three times the size of what you see”, Low mentioned, gesturing at the crowd around them.

His business partner, on the other hand, was a “shrewd negotiator”. When the KTV underwent renovation, the bar top was constructed for free. “We didn’t stop operations either — patrons were invited to come in and see the transformation for themselves.” It sounded slightly amusing to Hoo at first, but on second thought, he felt it was the kind of entrepreneurial grit and spirit that would have been needed to open and maintain a gay KTV under less than friendly public attitudes. Business was so good that it would eventually attract other competing gay clubs and bars to the area, helping to seed Tanjong Pagar’s gay reputation.

So why did Low set up shop in Tanjong Pagar? “KTV has to be somewhere where nobody goes to normally, and rental was cheap,” Low replied. It was a surprisingly simple but reasonable answer.

Inner Circle was a place where gay men who loved to sing could meet new friends,interact with people they already knew and enjoy themselves in a relaxing environment. It was a comfortable and cosy refuge they could call "home". Patrons especially enjoyed its New Year's Eve celebrations.

The pub provided divas with an outlet to show off their vocal skills for almost 10 years before drawing its shutters in 1998.

A few years later, an eponymous successor was resurrected at a new location at 3 Duxton Hill, a stone's throw away from its former address; telephone number 6220-6966. This establishment had a completely new management, was less popular than the original and closed on 24 July 2004. 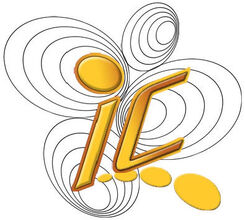 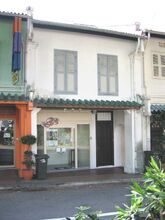 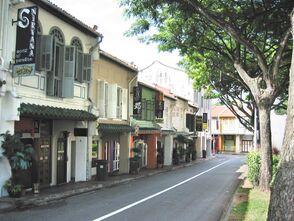 Ample parking space was available just outside or at Craig Place along Craig Road which houses a multi-storey car park.