Joe Wong, born in 1984, is a transgender man originally from Singapore and currently living in Bangkok, Thailand.

Wong works as the Program Manager of the Asia-Pacific Transgender Network (APTN) and oversees the institution and regional programme and policy development of the network. He is responsible for resource mobilisation, communications, media awareness, communications, and establishing partnerships and collaborations with international, regional and national stakeholders. He has prior experience in working with non-governmental organisations (NGO), community-based organisations (CBO) and United Nations (UN) agencies. He was previously a board member of APTN.

He is particularly interested in advocacy for HIV/AIDS, health and rights especially of transmen, whose needs have been largely neglected.

Wong's personal experience echoes that of transgender people in the region, who have felt humiliated, intimidated, and excluded, and sometimes had their identity exposed against their will. He worked with several UN agencies and been active in planning advocacy events across the region. Wong is the first transgender man on the APTN board, bringing visibility and awareness to the movement around the region, amplifying voices of transgender people who have been largely neglected in Asia.

In 2015, Wong was interviewed at the Salzburg Global's LGBT Forum by its chairman, Dr. Klaus Mueller, on the subject of family as those who stick together despite the challenges[1]. 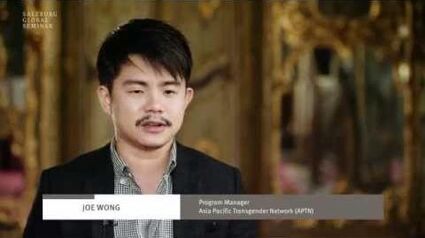 In 2015, Wong was interviewed by Sexual Observer, a website which publishes articles on human sexuality. He admitted that as a transman, it was not easy to talk with other trans people about sexual experiences. The reason was that not all were comfortable talking about how they use their genitalia. Talking about sexual pleasure is a giveaway to what one has or has not done to one's body, specifically to one's genitalia. Sexual experiences also revealed details about one's sexual orientation, and Asia was conservative in that regard.

Wong felt that transgender people had to explore a lot before knowing what was most pleasurable for them, and to establish their sexual boundaries. When a transgender person has sex with a cisgender person, it is hard for them to have an idea of what roles they would like to assume. If one was a transwoman and assuming a more dominant role, would the male partner see her as a guy with long hair or would he see her as a woman who is taking a more dominant role? Usually, cisgender heterosexuals automatically knew what they wanted and were expected to do in bed. For a trans person it was harder to navigate through sexual experiences.

An important problem is that there are practically no resources for transgender people across Asia to learn about sexual pleasure: “Within the trans community, most of the advice comes from conversations with friends. Sexual pleasure is not a topic that many transgender people would feel comfortable talking about in larger groups, but rather with small groups, social media or on one-to-one conversations if the person feels safe”.

A good way to provide positive sex education to the transgender community would be through specific educational materials: “A lot of young trans people are in the stage when they are experimenting, exploring, finding their sexual orientation. With such materials, you can start talking about the topic: Has anyone done it? How would that work? Would this keep us safe? It is also important to explain that there is no need to feel guilty if you feel pleasure with the genitalia you were born with”.

On the other side, transmen who are attracted to women talk more openly about pleasure and sex: “They tend to talk as a cisgender heterosexual man would talk. When you transition, it is also expected for you to feel attracted to the opposite sex”. Thus, heteronormativity also acts within the transgender community and prevents some gay trans men to talk openly about pleasure. Finally, Wong also highlighted that another taboo are the relationships that occur between transwomen and transmen.