At the time of the founding of Singapore by Stamford Raffles in 1819, Bugis traders were already sailing up Singapore's southern waterways, mooring their boats and trading with local merchants (see main article: Bugis in Singapore). By 1820, the distinctive Bugis schooners called palari were a familiar sight along the Kallang River. 19th century Bugis maritime contributions (much documented in Bugis Street's atrium displays and which are unfortunately being obliterated and lost by vendors) were vital to Singapore's entrepot sophistication.

At first, the Bugis intermingled with the aboriginal Orang Laut who had long established settlements along the swampy area of the Kallang River. These Orang Kallang (also called the Orang Biduanda Kallang) lived on boats and sustained a subsistence living by fishing and collecting other materials from the nearby forests[1]. After 1819, the Orang Kallang were relocated by Temenggong Abdul Rahman to the northern Singapore Straits at Sungai Pulau. Tragically, in 1848 the Orang Kallang were wiped out by a smallpox epidemic.

Thanks to their seafaring prowess, the Bugis held power in the Riau archipelago for a long time. When the Dutch began to exercise a trade monopoly in the region, the Bugis' seat of power in Riau was threatened. Armed clashes with the Dutch in Indonesia (Dutch East Indies) resulted in 500 Bugis fleeing from Makassar in February 1820 to settle down in the fledgeling British colony of Singapore with their chieftain, Arong Bilawa. Bringing with them their prized trade network, the Bugis quickly formed an important component of the island's economy. Their presence was significant enough for Stamford Raffles to take notice. 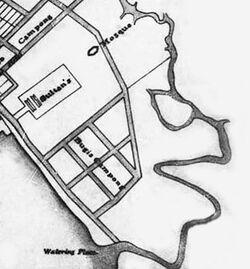 Raffles' 1828 master plan for the settlement, which followed a racial approach to allocating residential spaces to the various communities in Singapore, allotted the Bugis the land between Kampong Glam and the Rochor River. This area, on the right bank of the river and originally occupied by the Orang Laut, was logically named Kampong Bugis[2]. It was near the Sultan's compound. The settlement later expanded to the north and left banks of the Rochor River near today's Kallang Bridge, as well as the banks of the Kallang River. This location was also convenient and practical because the Bugis could moor their trading boats nearby.

The Dutch eventually allowed Arong Bilawa to return to Riau but he had settled in Singapore by then and, along with many of his followers, chose to remain. Many intermarried with the local Malays and became assimilated into Malay culture. The community thrived and Singapore soon became the centre of Bugis trade in the region.

With other Malay groups and the Arabs settling in this vicinity, the Bugis area became a Muslim heartland. Notable Arab entrepreneurs developed the shophouses of the area into a multicultural business zone by the late 19th and early 20th century. The intellectual enrichment of the area by pilgrim travellers and Muslim publishing businesses and intellectuals made Singapore circa 1900 one of the great centres of Islamic scholarship and information.

Between the First and Second World Wars, flourishing businesses were established, especially by Japanese proprietors, with the possible ulterior motive of being an intelligence-gathering source.

In modern day Singapore, "Kampong Bugis" no longer refers to a kampung (Malay hamlet or village in a Malay-speaking country) but is the name of a quiet lane on the left bank of the Rochor River which leads to Kallang Riverside Park. It is home to a scattering of factory buildings, a Hindu temple, a park and a hipster café frequented by teenagers. Up to the late 1990s, an unmistakeable landmark, the cylindrical metal stucture of the old Kallang Gas Works was situated right next to it.

During the Japanese Occupation from 1942 to 1945, a number of Bugis were resettled in Pontian, Johore and others moved out to Beach Road and Arab Street. Today the Bugis have been assimilated into the Malay community, with most living in HDB flats.