Leona Lo is a Singaporean transwoman and a vocal advocate for transgender equality. 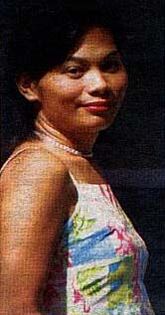 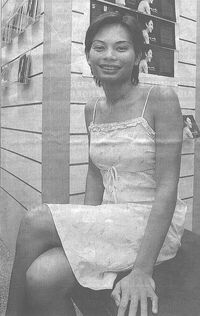 Apart from knowing that she was not gay, Lo did not know how she was different - until she was 15 and found a book on transsexuals - Cries In The Dark - at the library.

Otherwise Leona Lo, who was born Leonard Lo, is a 1.71 metre tall, leggy woman with a penchant for short, shoulder-baring dresses.

The 27-year-old corporate communications assistant manager is, to date, the first Singaporean transsexual woman to fling off the mantle of secrecy surrounding men who become women through surgery, by writing a book on the subject.

My Sisters, Their Stories, which was launched in 2003 by Miss Lo at the MPH bookstore at Parkway Parade, is both a visual feast and a mind-opener.

The 96-page coffee-table book features 13 trans- sexual women, 10 of whom are local.

For Lo, a Masters degree holder who wrote the text, it is an attempt for her fellow 'sisters' to be understood.

It is also the culmination of her lifelong journey to find her own gender identity.

'I want everyone to know who I am. I am sick of lying,' said Ms Lo, who used to tell everyone who asked that she studied at St Nicholas Girls' School instead of the all-boys' school Catholic High.

The taunts of 'Ah Kua' and 'Bapok' (colloquial terms for effeminate men) first came in primary school when the only son of a businessman father and customer service officer mother would pretend to be actress Julie Andrews and spontaneously belt out 'the hills are alive' from The Sound Of Music soundtrack in class.

What Ms Lo called 'nasty jokes' followed her to Catholic High, where she often donned dresses and took to the stage to act out the female parts.

'No boys were eager to play the female role except me... that was my only way of expressing myself.

'At the end of every virtuoso performance, I would sashay offstage with Gong Li's poise and hauteur. Steeped in my reverie of superstardom, I would drift trance-like back to class, only to discover the words 'Leonard is a bloody faggot' splashed across my desk.'

Apart from knowing that she was not gay, she did not know how she was different - until she was 15 and found a book on transsexuals at the library.

It was Cries In The Dark by the late Professor S. S. Ratnam, who used to perform sex-change surgeries at the National University Hospital.

The book changed her life, but she did not go under the scalpel until she was 21.

In the interim, she spent two years at Hwa Chong Junior College and two years in the army as a combat medic, where she had a mental breakdown from depression.

'Everyday was torture, I felt like dying. It was a struggle to live,' she said.

That was when she first told her parents that she wanted to be a woman.

'My parents refused to believe it. They brought me to mediums, exorcists, people from all kinds of religions, to pray over me.'

They finally gave in when a reputed fortune teller from Taiwan took one look at Ms Lo, clad in jeans, blouse and lipstick, and declared: 'I can only see a woman.'

She went off to the University of York in Britain to study English Literature and, in her first year, took 14 days off to fly to Bangkok for the surgery.

Today, the only reminder that she is not a woman through and through is having to go for hormonal implants in her abdomen once a year.

Ms Lo, who has had two boyfriends in Britain, hopes to 'meet my Prince Charming, have a beach wedding and give out insect repellants as door gifts'.

What about children? 'I might have cats instead,' she said.