Parliamentary petition to repeal Section 377A

In 2006, the Ministry of Home Affairs announced that it would be carrying out an extensive review of the entire Singapore Penal Code, the first in 22 years. The exercise took over a year and gathered extensive feedback from the public via the press, the internet and live forums. The most heated debate concerning the major review of the Penal Code was not over which laws were to be repealed or amended, but over the statute which would be retained, i.e., Section 377A, the law which criminalised sex between men.

In the second weekend of October 2007, a parliamentary petition to repeal Section 377A was organised by human rights lawyer George Hwang, CEO of LGBT web portal Fridae.com Dr Stuart Koe and housewife Tan Joo Hymn [1]. It was revealed during a press conference that it had garnered 2,519 signatures from Singaporeans and Singapore residents[2]: 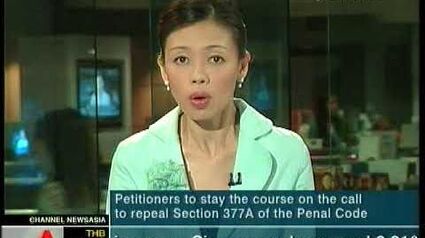 The parliamentary petition was a democratic instrument that had lain dormant until resurrected by its organisers. The last time such a petition was presented to Parliament was over 20 years ago. The current one was endorsed by the Clerk of Parliament and scheduled to be presented by NMP Siew Kum Hong on Monday, 22 Oct 07.

On Monday, 22 October 2007, Nominated Member of Parliament Siew Kum Hong tabled a petition to the Parliament of the Republic of Singapore in support of the repeal of Section 377A (see videos:[3],[4],[5],[6],[7]). A petition is required to pass through the scrutiny of the Public Petitions Committee in order for the issue to be fully debated in Parliament. The debate which ensued regarding the petition was the most heated in recent Parliamentary history.

The most impassioned opposition to the petition was provided by fellow NMP Thio Li-ann, imploring the government to retain Section 377A (see videos:[8],[9],[10],[11]).

Other PAP backbenchers, while endorsing the retention of Section 377A, did offer words of support for the gay community (see video).

Ms. Indranee Rajah, a PAP Member of Parliament and former chairperson of the Government Parliamentary Committee for Law and Home Affairs, reiterated the Ministry of Home Affairs' "assurance" that it would not actively prosecute people under that Section. "But in recognition of the fact that there is still quite a strong majority uncomfortable with homosexuality, the Section must stay," she said. However, she suggested that Singaporean society could evolve to accept homosexuality in the future (see video:[20]).

Disappointingly, opposition MP and Workers' Party chairperson Sylvia Lim did not take a stand regarding the repeal of Section 377A (see video:[21]). She proposed the setting up of a Select Committee to scrutinise the wording and execution of the Penal Code and to comprehensively archive and make publicly available feedback from all civic groups.

In his concluding speech, Prime Minister Lee Hsien Loong highlighted the point that Singapore was "basically a conservative society" with many being "uncomfortable with homosexuals, more so with public display of homosexual behaviour" (see videos:[22],[23],[24],[25],[26] and transcript of speech). However, as recognition that homosexuals “are often responsible, invaluable, and highly respected contributing members of society”, the government would not "proactively enforce Section 377A on them."

Other important statements which the Prime Minister made, revealing Singapore's concept of human rights, were that his government did not "consider homosexuals a minority, in the sense that we consider, say, Malays and Indians as minorities, with minority rights protected under the law" and that it would not "allow or encourage activists to champion gay rights as they do in the West."

He said, "The decision on whether or not to decriminalise gay sex is a very divisive one and until there is a broader consensus on the matter, Singapore will stick to the status quo."

The eventual decision by Parliament was to retain Section 377A. (See archives of all parliamentary speeches made with regard to the Penal Code review on Monday, 22 Oct 07 and Tuesday, 23 Oct 07).

Repealing the non-gender specific Section 377 while retaining Section 377A, which criminalises sex specifically between men, effectively served to enshrine discrimination against MSM (men-who-have-sex-with-men) in Singapore's legal system. Whether this was constitutional or not was thrashed out in the courts several years later.

Reaction of the public[]

While conservative Singaporeans who had agitated for the retention of Section 377A were pleased, the LGBT community and more progressive factions were enraged.

Subhas Anandan, president of the Association of Criminal Lawyers in Singapore, questioned the rationale for not repealing Section 377A in a Channel News Asia interview:

"If you are a homosexual or a lesbian, I think you can get into trouble. We are talking about an inclusive society and being more broad-minded. Why do we want to keep these people away, out of the circle? I think we should be more broad-minded, more sympathetic and allow these people to be included in our society."[28]

The debate over whether or not to repeal Singapore's anti-gay law attracted the attention of the international media (see video), as it was perceived to be a bellwether of Singapore's human rights record.

In January 2008, subsidiary legislation was implemented to amend the schedules of various criminal statutes so as to bring them in line with the recent Penal Code reforms which took effect on 1 Feb 08. One of the changes was that after the latter date, all persons convicted under Section 377A would no longer need to be registered, i.e. they would not have any criminal record for this offence [30]. At the time of writing, the legal and social implications of this were still unclear.