Public toilets in any major city see their fair share of surreptitious gay cruising activity and Singapore is no exception. In fact, Singapore's perenially hot, humid weather seems to facilitate it. However, with the relative official tolerance of gay saunas since the late 1990s, coupled with the existence of many open air cruising grounds and opportunities for online hookups even though male gay sex remains illegal in the republic with the retention of Section 377A of the Penal Code, the amount of toilet cruising has witnessed a significant reduction since the early 2010s.

Public toilets were thought to be the first local venues where gay men could meet others with similar intentions, as and when they felt the urge. This was typified by the especially heavily patronised one just inland of the Singapore River where the flow of human traffic was the greatest, as the area was the busiest hive of economic activity on the island since its early history. These toilets therefore hold the ignominious distinction of being the cradle of the nascent gay community in Singapore. (It must be emphasised, though, that the use of the qualifier "ignominious" is a value judgement imposed by the arbitrary values of mainstream society. To the homosexual men who sought an emotional and carnal connection with kindred spirits at a time when no alternative avenues were available, it was just another physiological necessity in life; indeed, a basic human need.)

The most well known public toilet was the rectangular structure with the most unique location of any loo in Singapore - it was situated smack in the middle of North Canal Road and South Canal Road at their junction with Chulia Street, next to OCBC building. It was an integral part of the Hock Lee Bus Terminus where one- and two-digit number bus services eg. 4, 8 and 19, ended their journey. It therefore was the final stop for commuters from all over the island due to its central location. According to one source, the toilet was known colloquially in Hokkien as "sang chai tang", but its meaning was not explained. Others recollect that both the bus terminus as well as its adjoining toilet were referred to as "sōaⁿ kíaⁿ téng" (山仔顶; shān zaì dìng in Mandarin; top of the little hill). This was because a mound had to be levelled before the structures could be built on the land. The toilet's proximity to Hong Lim Park may also explain why the latter became Singapore's first well known cruising ground, both locally and internationally, and the first Singaporean gay venue to be listed in the Spartacus International Gay Guide.

The public convenience was not only used by bus drivers and conductors after their shift, but also by alighting passengers and homosexual men from around Singapore. It was relatively small compared to other standalone roadside toilets like the ones at Clarke Quay and Balestier Market (see below) but the size limitation did not deter cruising activity late at night and in the wee hours of the morning. When Hong Lim Park became a well known gay cruising area shortly before the 1960s, homosexuals had an additional venue to adjourn to after visiting the toilet. During the 1960s, the toilet still relied on the bucket system for the disposal of human waste so it stank to high heaven. Thus, if any gay men were loitering in it for a prolonged period of time, they would yearn for the fresh air of nearby Hong Lim Park. This furnished the park with an added attraction.

The neighbouring back alleys parallel to the right bank of Boat Quay (looking downstream) also became popular nocturnal haunts for gay cruisers when the area was a couple of rows of derelict buildings, deserted and unused from 1983 to 1989. Such activities stopped when Boat Quay was gentrified in the 1990s and designated a conservation area housing restaurants, cafes, bars and small shops.

The Chulia Street toilet was demolished in the mid-1980s, just before the massive redevelopment of Raffles Place. Subsequently, people who needed to relieve themselves had to head for the nearest one which was located at Hong Lim Park and this loo experienced a rise in cruising activity as a result. 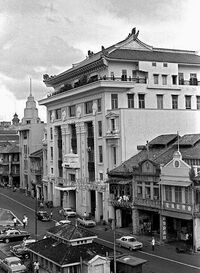 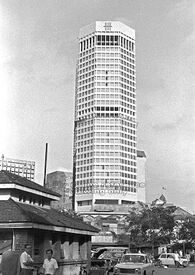 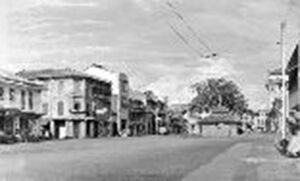 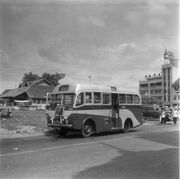 The following public toilet along Clarke Quay had a unique hexagonal design and it had a similarly shaped counterpart on the other side of the bridge spanning the river. It was also a magnet for gay cruisers but was not as iconic and well patronised as the structure described above, presumably because its location was not at the crossroads of human traffic like the structure described above. It contained pipes where users could take a shower. 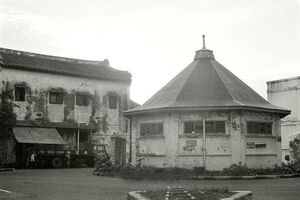 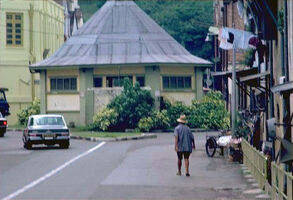 The elongated, rectangular-shaped public toilet next to Balestier Market, which is now a 24-hour food court, was one of the most popular cruising spots in the city fringe area during the latter half of the 20th century and the only such structure still standing today. 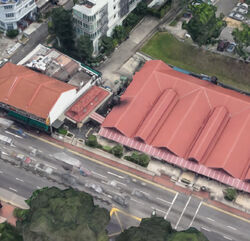 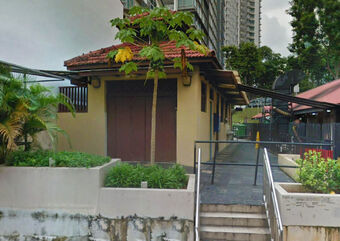 The original building, where one entered the toilet free-of-charge via a long, whitewashed, walled corridor on the left (looking from Balestier Road), was extensively renovated in the late 1990s. It was revamped to the current modern design where entry is gained via a turnstile on the right and whose internal layout is completely different. The original toilet encompassed both a male and a female section but only the male portion, which made up the right half, was packed with men at night.

From the 1960s to the 1990s, many homosexual men used to loiter in a roughly linear formation against the wall along the elongated entrance nocturnally from 10pm onwards. The crowd was especially profuse on a Saturday night. Closeted gay professionals, like the mildly effeminate head of a medical department at Alexandra Hospital, were sporadically spotted there in the 1990s. After cruising, patrons could adjourn to the back alley between the toilet and the market for a breather, or perhaps some discrete open-air cruising.

One gay cruiser graphically recalls that the caretaker of the loo would rent his little room, which was located at the front of the toilet just next to the main road, for $2 per sex session. The guardian was an old man in his late 50s and sometimes when the night was quiet, he would offer his own loins for the taking and the cruiser obliged him with hand jobs on several occasions. One rainy night, when the cruiser was stuck there, the elderly man actually stripped and rimmed him until he begged for mercy. He was not penetrated, though, but they assumed a 69 position and he masturbated the caretaker till he ejaculated all over his face.

There existed a less cruisy public toilet, very similar in construction to the one at Chulia Street, along Merchant Road which served the labourers working along Alkaff Quay and employees from Ellenborough Market. Cruisers experienced some random action here but it was often a hit and miss affair. However, it was some gay men's favourite place for ogling at the ripped bodies of the labourers who bathed there completely nude and were not ashamed to display their buff, shapely bodies. Interestingly, this was the venue where a certain gay Singaporean met one of his first labourer friends whom he serviced regularly about once in a fortnight for several years until the structure was torn down. The photo on the left from the National Archives records it as having been demolished in the early 1970s.

Singapore's economic boom which began from the 1970s onwards saw a frenzy of construction which included the sprouting up of numerous shopping centres, or malls, as they are called today. Most of the public toilets in these malls attracted gay cruisers and such activity goes on to this very day.

One of the first and most well known was Pearls Centre which was demolished in early 2018.