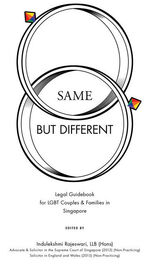 Same But Different: A Singapore LGBT Guide for Couples & Families is a reference work published in June 2017 which aims to empower its target readership with the knowledge to manage the legal issues it commonly encounters.

The guide uses fictional profiles of LGBT families to take readers through various aspects of the law. It also examines legal ambiguities to do with marriage and cohabitation contracts, property, wills and inheritance, medical decisions and children.

The law that criminalises sex between men, Section 377A of the Penal Code, remains on the statute books and there has been no progress made towards recognising LGBT couples or families in the law. In the present political climate, there is no prospect in the near future for progress in the recognition of LGBT families. However, at the same time, the LGBT community is increasingly coming out of the closet and is living ordinary (but legally unrecognised) lives with their partners and sometimes their children.

Hence, it has become even more important for the community to know how and why existing laws apply to their families and be empowered with the information to protect themselves under the legal system. While pro bono clinics exist and there are even guidebooks for the average person such as “You and The Law” and “Teens and the Law”, the needs of the LGBT community are unique and may not be addressed by these references.

Most LGBT families either do not know any LGBT-friendly and knowledgeable lawyers who are able to address their concerns or cannot afford to seek legal advice for even basic queries. Further, the fear of discrimination and the fact that male gay sex is still illegal frequently discourages the use of avenues such as pro bono clinics and even seeking paid legal advice.

Thus, many LGBT families do not have access to reliable, accurate legal information, and hence, have no effective access to justice. The guide aims to answer frequently asked questions. It does not aim to replace legal advice and work done by practicing lawyers, but simply provide a starting point that will empower the reader to take the necessary steps themselves where possible, and seek more detailed advice and legal help when necessary. The guide is written in a layman-friendly manner. This is to break down complex legal concepts and nuances for the uninitiated.

The project was initiated by lawyer Indulekshmi Rajeswari, 29 (in 2017), who identifies as a bisexual woman. She said her friends frequently asked her about the law and their LGBT relationships but she did not have the answers.

"I knew my friends were asking me because they did not know other LGBT-friendly lawyers," she said. Hence her decision to create the guidebook, which is modelled after LGBT guidebooks in other countries such as the United States.

A team of 18 volunteers was set up to start drafting the book in November 2015. They included lawyers, law students, academics working on the content, and those who did the editing, marketing and design work. Lawyer Deryne Sim, 32 (in 2017), volunteered because she felt it was "much needed". She spent more than 30 hours working on chapters dealing with wills and lasting power of attorney.

33-year-old PhD student Sia Ching Sian, who donated $100 to the campaign, said she was glad to see a guide like that, adding: "It is hard to navigate being in an LGBT relationship here and I'm looking forward to the sections on children and assets."

The printed guidebook was distributed to LGBT organisations and a downloadable PDF version was made available for free online[1]. Leow Yangfa, executive director of LGBT counselling group Oogachaga, said that the guide filled a "much needed resource gap" for social workers.

Indulekshmi explained that any lawyer could look at laws and regulations to answer various issues but there were areas without publicly available policies. "For example, we could not find any publicly available guidance on what is required to change one's gender legally," she added. "This is one of the many examples of the type of legal ambiguities that LGBT people in Singapore face. It is a type of ambiguity that is often hidden or rarely discussed."