Sayoni is a Singapore-based platform for Asian queer women, comprising a blog, and a forum. Founded by Jean Chong and a group of women from diverse backgrounds, age groups, economic status and ethnicities, it aims to empower queer women via a two-pronged approach to encourage dialogue within the community and to educate the general public. Both its website and Facebook page are open to public view.

In 2011, Sayoni was the first LBT organisation in the Asia-Pacific and Southeast Asia to get LBT (lesbian, bisexual and transgender) issues included the Convention on the Elimination of Discrimination against Women's (CEDAW) concluding observation. In 2019, Sayoni along with Bi+collective were the first LGBT groups in Southeast Asia and the Asia-Pacific to submit a Child Rights Convention (CRC) report on LGBT children.

When one is ready, coming out to the people around oneself has a major impact on changing society's perception of the LGBTQ community in Singapore. COuCH is a movement which will give LGBTQ persons considering coming out the encouragement to do so, thereby changing society's perception of the LGBTQ community. It is also about the people who love and support their LGBTQ family, friends and colleagues, enabling them to ʺCome Outʺ and show that there are accepting people out there. 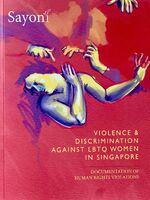 Violence & Discrimination against LBTQ Women in Singapore is a book published in 2019 by Sayoni. The work is the first attempt to systematically document the experiences of lesbian, bisexual, transgender and queer (LBTQ) persons in the island nation. It comprises 14 chapters and also includes helpful resources for individuals seeking help. In early August 2019, Sayoni worked together with NMP Assoc Prof Walter Theseira to file and raise multiple Parliamentary Questions regarding violence against LGBTQ persons and mental healthcare provisions for them. The questions were based on evidence presented in the book. Given the prevailing social climate and potential backlash Theseira may have faced raising LGBTQ-related issues, he proved to be a shining beacon through his sustained efforts in raising the pertinent issues with Ministers. Few MPs had dared to address the injustices LGBTQ persons faced and Sayoni valued his efforts in being a steadfast ally by giving voice to the survivors of violence and discrimination in Parliament.

Rainbow Scorecard: Review of the Decade, 2020[]

On Wednesday, 24 June 2020, less than three weeks before the 2020 General Election, queer women's advocacy group Sayoni published a report entitled, “Rainbow Scorecard: Review of the Decade”, which graded Singapore politicians based on their positions on LGBTQ issues over a decade[3],[4]. It looked at the statements made by local politicians from 2011 to 2020 on social media, mainstream and independent news sites and the official written record of parliamentary proceedings, known as Hansard. The group also reached out to the politicians for comments or updates on their positions on LGBTQ issues, such as their views on Section 377A, anti-discrimination legislation, and policies on gender marker change and transgender healthcare. The politicians were then graded according to the following criteria: