On 15 July 1996, the Singapore Broadcasting Authority (SBA) issued Notification no. 2400/96 which specified a Code of Practice which covered not only the Internet, but also all broadcast media, including television. The foreword to the Code of Practice stated:

Among the material to be prohibited were:

Owing to the ignorance of the SBA that homosexuality and lesbianism were not 'sexual perversions' according to prevailing international medical opinion but variations of the norm, and widespread public dissatisfaction with the vague, inaccurate and unnecessarily restrictive wording of the Code of Practice, it was revised on 1 November 1997 to state:

While being a quantum leap from incorrectly labelling homosexuality a sexual perversion, the non-specification of what exactly "advocates homosexuality" made it a taboo subject for television documentaries for 7 years following the first issueing of the Code.

The penalty for media licencees flouting the Code was a hefty fine, as Channel i, the now-defunct English-language sister channel of Channel U, discovered after it aired an interview with Anne Heche in 2003. During the interview, Heche spoke about her lesbian relationship with Ellen deGeneres, amongst other things. Channel i was subsequently fined $15,000 by SBA, the broadcasting watchdog, for "justifying, promoting and glamourising homosexuality". 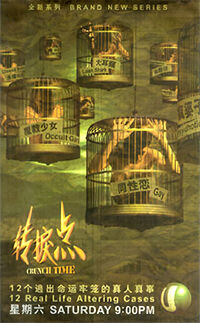 It was only in May 2003 that the very first locally-produced television documentary dealing with homosexuality as its main subject was broadcast on Singaporean airwaves. It was a homophobic, 30-minute episode in a Mandarin-language series called Crunch Time 2 shown on Channel U, a television station owned by Singapore Press Holdings. The series was advertised in The Straits Times which promoted it as one that featured the turning points in the lives of 12 people including a loan shark, an unwed mother and a drug addict.

The particular program featured actors re-enacting the supposedly true-life account of a young, masculine gay Singaporean man cruising for sex in public swimming pools and toilets. It reinforced the misconception that homosexuality resulted from having an unhappy home, parents who constantly fight, and being sexually abused. In this case, the protagonist was only 6 years old when he was asked by an adult female to perform sexual acts with a girl his age. The episode wound up with an interview with a spokesman from Choices, a Christian counselling group from the Church of our Saviour (COOS) in Queenstown which helps "straighten" out gay lives, which was the eventual outcome for the gay man in the story. He was depicted as having been "successfully'" converted through counselling from a dissatisfied, unfulfilled homosexual to a man happily married to a female spouse and producing a son.

The negative and stereotypical depiction of homosexuality in the program prompted an online petition which garnered more than 200 signatories over the ensuing weekend[1]. It probably had a significant effect as the episode was the last time a homophobic documentary was aired in Singapore. However, the overwhelmingly influential factor in ending televised homophobia was Prime Minister Goh Chok Tong's statements in Time magazine in July 2003 about reversing anti-gay hiring policies in the civil service (see main article:PM Goh Chok Tong liberalises employment of openly gay individuals in civil service, July 2003.

In July 2003, Prime Minister Goh Chok Tong made statements in Time magazine that the Civil Service would be overhauling its previous policy of not employing openly gay individuals. This landmark event opened the floodgates of television reportage on Singaporean gay news. In typical top-down political management, television was now commandeered, or at least given the green light, to make a complete U-turn so as to educate the public on the acceptability of homosexuals as equal citizens and the injustice of discrimination, especially at work.

Barely 2 months after the above documentary, which aimed to encourage homosexuals to turn straight, Channel U aired a groundbreaking episode in the info-tainment hands-on series "OK, No Problem" at 7:30 pm on 30 July 2003. This time, it sought instead to educate the public that one could not judge a man's sexual orientation merely from his external appearance and to foster understanding and acceptance of homosexuals. Popular compere Chuan Yi Fong was filmed in a hawker centre in Ang Mo Kio where she asked random diners about their opinions on homosexuality. A range of positive and negative views were offered.

A live telephone interview with Dr. Tan Chong Kee, who was introduced as having written a thesis on homosexuality in Taiwan, was interpolated during a voting session by onlookers. The latter were asked to pick which, amongst 3 chosen men, they thought were gay, judging from externalities. After the votes were cast, it was revealed to the audience's surprise that none of the 3 were gay. In fact, one had brought along his wife and baby son.

The highlight of the episode was the appearance of an actual gay man named Anthony who was initially hidden behind a black curtain. After a suspenseful emergence to face a wall of curious onlookers, he spoke emotionally about his own struggles as a homosexual and how he hoped society would accept them. He also publicly thanked Prime Minister Goh Chok Tong for his recent announcement that openly homosexual individuals would now be employed in the Civil Service. Anthony choked back his tears as he spoke, causing the compere's eyes to also redden, and members of the audience to listen sympathetically. For his courage, Anthony was presented with a bouquet of flowers and received a huge round of applause.

Later, on the same night of 30 July 2003 at 8:30 pm, the Malay-language channel Suria aired another documentary on homosexuality in its Detik (meaning "a second in time") series. The particular episode was entitled "Haruskah golongan Homoseksual diterima?" (Should Homosexuals be accepted?)

It featured interviews with a Malay gay man named Helmi and a Malay lesbian named Zac in which they recounted their self-discovery and personal relationships. People on the street were asked whether they could accept homosexuals and a diverse range of negative to positive opinions were expressed.

All in all, the programme tried its best to present a balanced view of homosexuality without moralising or injecting any subliminal message.

For a Malay to English translated transcript of the documentary, see the main article:Translation of "Detik" episode on homosexuality, 30 July 2003.

On 23 February 2005, Mandarin-language Channel U broadcast its third programme dealing with homosexuality in the 'Inside Out' current affairs series. The topic of the episode was "Do homosexuals have space for their activities?"

This programme was a landmark in that it was the first time that the views of leading gay activists, in this case Eileena Lee and Charles Tan from People Like Us 3 (PLU3), were given a relatively lengthy airing on primetime television. Artistic Co-Director Nelson Chia from Toy Factory Theatre Ensemble, a drama company which had staged several plays with homosexual themes and assisted in producing the episode itself, also presented a pro-gay voice for theatre in particular and society in general. Chia expressed, with great conviction, his disquietude with the contradictions between Singapore's liberalisation drive and the recent curbing of public gay spaces, despite the fact that he himself was a heterosexual family man.

An anonymous gay man named "David" was also interviewed at length, in which he doubted Singaporeans' general level of acceptance of homosexuals.

The programme was thought to have been produced to give an opportunity for the gay community to vent its concerns after an official clampdown on gay parties like Nation.04 and Snowball in 2004, presumably as part of a conservative backlash against the rampant spread of HIV infection within the community.

In spite of NUS sociologist Associate Professor Paulin Tay Straughan's[2]assertion in the documentary that homosexuals in Singapore enjoyed almost everything their straight counterparts were entitled to, gay community leaders like Alex Au begged to differ.

On Monday, 28 August 2006 at 8:30pm, Channel NewsAsia broadcast an expose in its Get Real! current affairs series by host Diana Ser of gay sex workers in Singapore's Little India. It was entitled, "Fifty dollar men" and contained sensationalist lines like "Foreign Worker by Day, $50 men By Night!", hidden cameras and masked-out faces[4],[5],[6].

On Tuesday, 30 September 2008, for the first time in almost 10 years, the controversial subject of gay sexuality education in Singapore schools was discussed in a talk show entitled "Am I Gay?" on Channel News Asia's Blog TV series[7]. Featured on the programme were 2 educators - Otto Fong, a former physics teacher in Raffles Institution who came out oh-so-publicly on his blog in 2007, and Prof. George Bishop, head of the Department of Psychology, National University of Singapore - and 2 teenage girls - Shraddha Ramsundar, 15, and Kohila Priyia, 18.