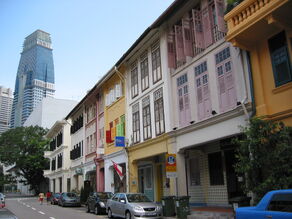 Stoke was Singapore's second gay sauna, located at 22 Ann Siang Road. It was established by well known, openly gay entrepreneur Max Lim and was the successor to Spartacus, also set up by Lim. It enjoyed a spell of success from 2000 to 2002 when it was the only gay bathhouse in Singapore and also the first to open 24 hours a day, all year round. The opening of other gay saunas to break its monopoly forced its owner to move into newer premises to refocus its strategy two years later.

Lim closed it down in mid-2002 and opened a new, larger sauna called Raw a short distance away along Ann Siang Road.