Just days before Nomination Day on 27 April 2011, the People's Action Party (PAP) team in the Holland-Bukit Timah Group Representation Constituency (GRC), led by Dr Vivian Balakrishnan, told the press that the Singapore Democratic Party (SDP) was suppressing a video which would "raise some awkward questions" about the party's agenda. Dr Vincent Wijeysingha's response was that he was unsure which video Vivian was referring to and that the SDP was "an open party". 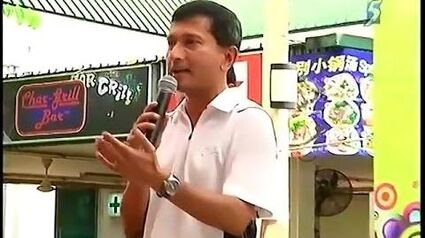 The issue of the video was clarified on 25 April 2011, two days before Nomination Day, with both the PAP and the SDP issuing statements about the matter.

The PAP's release addressed the online video which it alleged the SDP was trying to suppress. The statement is reproduced below and undersigned by Dr Vivian Balakrishnan and his GRC team:

"Dear Friends of the Media

Kindly call me at [phone number deleted] if you have any queries or if you need any clarification.

What is his agenda?

A video has been posted on the internet showing Vincent Wijeysingha participating at a forum which discussed the promotion of the gay cause in Singapore.

The discussion at the forum also touched on sex with boys and whether the age of consent for boys should be 14 years of age.

In the video, Wijeysingha was introduced as being from the SDP.

In addition to other comments, Wijeysingha stated: ‘I think the gay community has to rally ourselves. Perhaps one outcome of today’s forum would be, for those of us who are interested, to come together to further consider how we can address the 377 issue as well as further rights issues in relation to gays and lesbians.’

We believe that candidates should be upfront about their political agenda and motives, so that voters are able to make an informed choice.

The issue is not Wijeysingha’s sexual orientation. That is a matter for him.

The video raises the question on whether Wijeysingha will now pursue this cause in the political arena and what is the SDP’s position on the matter.

The above release was ostensibly aimed at smearing Dr Vincent Wijeysingha and the SDP team, trivialising their efforts and reducing them to alleged advocates of an issue which homophobes in their own bigoted world find morally contentious - the "gay agenda".